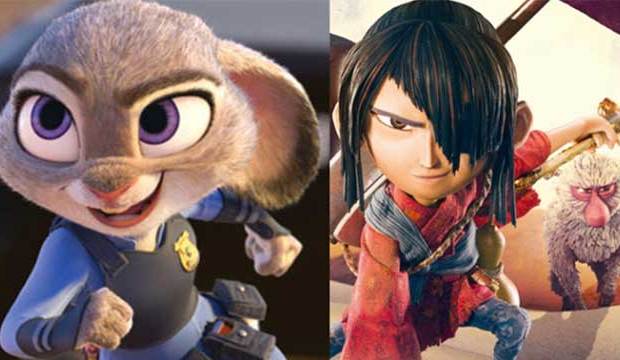 While most of the Oscar races have a clear frontrunner, Best Animated Feature may see an upset with “Kubo and the Two Strings” prevailing over long-time favorite “Zootopia.” Remember, Laika’s stop-motion film won at the BAFTAs two weeks ago and could well prevail on Sunday as well over the Disney blockbuster.

Let’s take a closer look at the showdown between these two films.

In one corner, we have the Mouse House’s “Zootopia,” which scored a jaw-dropping 98 at Rotten Tomatoes. Many critics praised it for handling the topic of racism with such maturity while still being accessible for the tykes. Heck, it even has become more timely now than in the four years it was in production. Truly wild, if you will pardon the pun.

Like “Frozen,” it has become a global phenomenon and followed that film to become only the second-ever Disney animated film to gross over $1 billion worldwide (not even “The Lion King” could do that; I know, crazy right?). Should “Zootopia” prevail, it will be the fifth in a row for the combined Disney/Pixer powerhouse. And it would be the third win for Walt Disney Animation Studios, which lost six bids over 12 years before finally winning with “Frozen” in 2013. Nothing like making up for old time’s sake, am I right?

And in the other corner, the equally lauded “Kubo and the Two Strings,” which merited 97 at Rotten Tomatoes. This is the only the fourth feature from Laika. Each of their first three stop-motion films — “Coraline” (2009), “ParaNorman” (2012) and “The Boxtrolls” (2014) — contended in this category. Maybe this fourth time up to bat will be their lucky break.

It also reaped a bid for Best Visual Effects, only the second animated film to do so after “The Nightmare Before Christmas,” which lost to “Jurassic Park” back in 1993.  The film is certainly a looker with its intricate stop motion detail.

I would certainly be the happiest camper in all the park if Laika snatches up one or both of the wins but its disappointing box office returns hurt its chances. In the end, I think more voters will remember “Zootopia” with its timely subject matter.