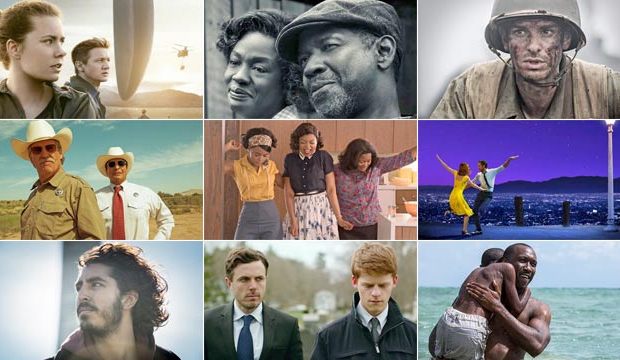 Summit Entertainment heads into the 89th Academy Awards on Sunday as the studio with the most nominations. It scored 22 in total: a record-tying 14 bids for “La La Land,” six for “Hacksaw Ridge” and a pair for “Deepwater Horizon.” (See the full film-by-film breakdown.)

Paramount is the runner-up with 18 nominations spread across seven films: eight for “Arrival,” four for “Fences,” two for “Florence Foster Jenkins” and one apiece for “Allied,” “Silence,” “Star Trek Beyond” and “13 Hours: The Secret Soldiers of Benghazi ”

A24 has 10 nominations from a trio of films: eight for “Moonlight,” and one apiece for “The Lobster” and “20th Century Women.”

The seven bids for Walt Disney are spread out over five films: two each for “Moana” and “Rogue One: A Star Wars Story” and single nominations for “Doctor Strange,” “The Jungle Book,” “Zootopia.”

And Amazon makes its mark with seven as well: six for “Manchester by the Sea” and one for “The Salesman.”

The Weinstein Company can boast of six noms for “Lion.”

CBS Films and Lionsgate have four nominations for “Hell or High Water,”

Focus Features reaped four in all: two for “Kubo and the Two Strings” and one each for “Loving” and “Nocturnal Animals.”

Sony Pictures Classics has four from four: “Elle,” “Land of Mine,” “The Red Turtle” and “Toni Erdmann,”

20th Century Fox also sits at  four: three for “Hidden Figures” and one for the Dreamworks Animation feature “Trolls.”

And Warner Bros. is on the board with four as well: two for “Fantastic Beasts and Where to Find Them” and one apiece for “Suicide Squad” and “Sully.”

Rounding out the list of studios, Bleecker Street is represented by one nomination for “Captain Fantastic” and Universal has one for “Hail, Caesar!”