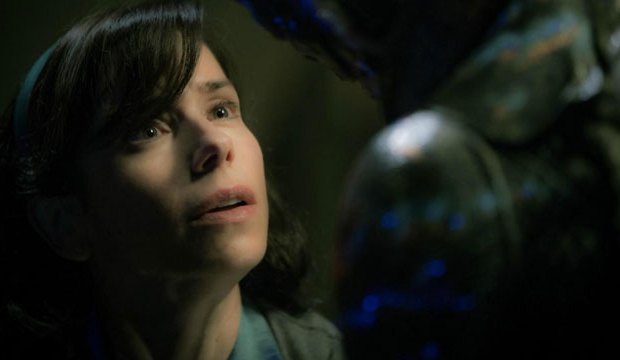 In Guillermo Del Toro‘s new film “The Shape of Water,” Sally Hawkins plays a mute woman who falls in love with an unlikely beau. After earning a supporting nomination for “Blue Jasmine” (2013), Hawkins is now earning major Oscar buzz for her leading role as cleaning lady Elisa Esposito — a true feat considering her character can’t speak. As Oscars trivia buffs know, Hawkins wouldn’t be the first person nominated for a nonspeaking role. Click through out photo gallery above that highlights 10 such performers, or read our contributor Robert Pius‘ descriptions below.

Jean Dujardin and Berenice Bejo — “The Artist” (2011)
While technically Dujardin (who won Best Actor) and Bejo (who was nominated for Supporting Actress) are speaking, audiences don’t hear them since this film was made as a silent picture. Dujardin does utter the words “with pleasure” in the last shot of this film which also won the Best Picture Oscar of 2011.

Max Von Sydow — “Extremely Loud and Incredibly Close” (2011)
In this film centering on the effects of the 9/11 terrorist attack on a young boy with Asperger’s Syndrome, Sydow plays a mysterious man who stopped speaking after the death of his parents in WWII and only communicates through writing notes and the words “yes” and “no,” which he has written on his hands. Sydow received his second nomination for this film as Best Supporting Actor after having previously been nominated in 1988 as Best Actor for “Pelle the Conqueror.”

Samantha Morton — “Sweet and Lowdown” (1999)
Morton earned a Supporting Actress nomination for this Woody Allen film. She plays a mute young woman who a jazz musician (played by Best Actor nominee Sean Penn) falls in love with, but ultimately rejects.

Holly Hunter — “The Piano” (1993)
Hunter won the Best Actress Oscar for her role in this acclaimed film which also won Oscars for its screenplay and supporting actress (Anna Paquin). While people often misremember this character as one who is unable to speak, in actuality the character just chooses not to. As she explains in voice over narration: “I have not spoken since I was six years old. Nobody knows why, least of all myself. This is not the sound of my voice; it is the sound of my mind.”

Marlee Matlin — “Children of a Lesser God” (1986)
Matlin remains the youngest woman to ever win the Best Actress Oscar for her role in the film adaptation of the Tony Award winning play. Matlin (who actually is deaf) plays a young deaf woman who communicates only through sign language and refuses to learn to speak because she doesn’t like the way she sounds. Matlin accepted her Oscar using sign language, but the following year when she presented the Best Actor award she chose to speak the names of the nominees herself without an interpreter.

SEEWho are YOUR favorite Oscar winners of the 2010s? Hurry and vote now in each of our 4 acting polls

John Mills — “Ryan’s Daughter” (1970)
In this film by famed director David Lean, John Mills won a Supporting Actor Oscar for his role as a mute and physically deformed character considered the town’s village idiot. While Mills doesn’t speak a word, he is a major catalyst to the film’s plot.

Alan Arkin — “The Heart is a Lonely Hunter” (1968)
Alan Arkin received the second of his four Oscar nominations for this story of a deaf and mute man who forms an unlikely friendship with a lonely young teenage girl, played by fellow Oscar nominee Sondra Locke.

Patty Duke — “The Miracle Worker” (1962)
Duke became the first teenager ever to win a competitive Oscar for the film version of her acclaimed Broadway stage role in “The Miracle Worker.” The film details the story of how teacher Annie Sullivan (Best Actress winner Anne Bancroft, whose award was accepted by Joan Crawford as recently dramatized in “Feud”) struggles to reach the young Helen Keller who was born deaf and blind and written off as a lost cause. Duke’s only spoken word in the film is “water,” which she utters in the climactic moment of the film when Sullivan is finally able to communicate with Helen.

Jane Wyman — “Johnny Belinda” (1948)
Wyman won a Best Actress Oscar for her role as a deaf mute farm girl who is raped and becomes pregnant with her attacker’s child. Wyman gave one of the shortest Oscar acceptance speeches ever by simply saying, “I won this award by keeping my mouth shut and I think I’ll do it again.”