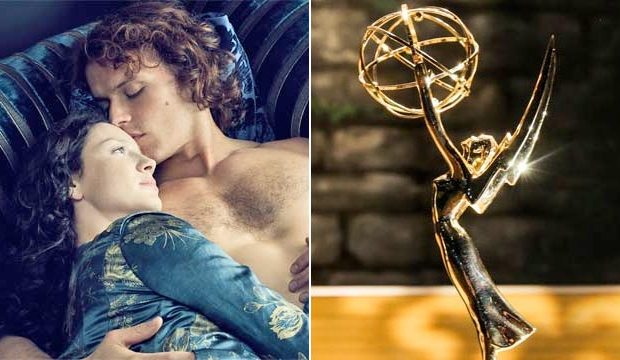 “Outlander” fans, don’t be upset when your favorite show doesn’t earn any Emmy nominations this year. Because “Outlander” didn’t air any new episodes during the eligibility period that ended May 31, 2017, it must sit out of this year’s Emmy race. Starz has announced that the hit fantasy series will premiere its third season in September 2017, so it will definitely be back for the 2018 Emmys.

Season 3 of “Outlander” will consist of 13 episodes based on “Voyager,” the third novel in Diana Gabaldon‘s eight-book series. The story will pick up right after Claire (Caitriona Balfe) returns to 1948 pregnant with Jamie’s (Sam Heughan) child. Her sudden return to the 20th century will have consequences for her marriage to Frank (Tobias Menzies). Meanwhile, Jamie endures the aftermath of the battle of Culloden, and the two time-separated lovers try to make a life without each other. See our photo gallery of “Outlander” Season 3 spoilers down below.

“Outlander” has earned three Emmy nominations over the course of its first two seasons: Best Music Composition in 2015 and Best Production Design and Best Costumes in 2016. While a fall premiere takes the show out of this year’s Emmy race, it could be great news for the series at the next Golden Globes. So far it’s earned four nominations there, including one for Best TV Drama Series, one for Menzies as Best TV Supporting Actor and two for Balfe as Best TV Drama Actress.

Returning in September means the show will be even fresher in the minds of the Hollywood Foreign Press Association, not to mention the Critics’ Choice TV Awards, which also vote in the fall and last year nominated both Heughan and Balfe for lead acting honors. What do you think of the “Outlander” delay? Be sure to vote in our poll below, and discuss this and more in our forums.