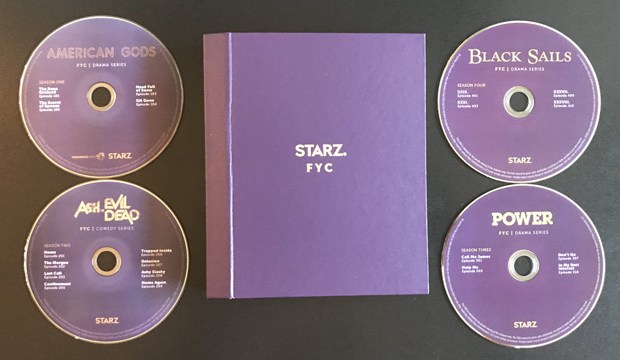 Starz’s hit drama series “Outlander” may be sitting out this Emmy cycle, but that’s not stopping the premium network from shipping off its 2017 FYC mailer to the TV academy membership. The dazzling purple booklet includes nine programs on nine DVDs, including new sci-fi show “American Gods” and returning dramas “Power” and “Black Sails.” Scroll down to see all of the programs that have been submitted within the FYC package, which also includes a passcode for voters to access Starz’s online screening room.

“American Gods” — Based on Neil Gaiman‘s successful 2001 novel, “American Gods” stars Ian McShane as Mr. Wednesday and Ricky Whittle as ex-con Shadow Moon, who unknowingly gets caught up in a supernatural war between new and old gods. These four episodes have been submitted for Emmy consideration: #101 “The Bone Orchard,” #102 “The Secret of Spoons,” #103 “Head Full of Snow” and #104 “Git Gone.”

“Power” — The gritty drama stars Omari Hardwick as James “Ghost” St. Patrick, the owner of a popular New York nightclub who’s also involved in one of the city’s most lucrative illegal drug rings. Created by Courtney A. Kemp, “Power” is produced by rapper Curtis “50 Cent” Jackson. Emmy voters can watch these four hours: #301 “Call Me James,” #305 “Help Me,” #307 “Don’t Go” and #310 “In My Best Interest.”

“Black Sails” — Starz’s expensive prequel to Robert Louis Stevenson‘s novel “Treasure Island” pirated up millions of passionate fans, who are still in mourning over the departure of their favorite show. Will the Emmys honor “Black Sails” with a goodbye hug for its fourth and final season? The episodes included within the FYC mailer are: #401 “XXIX,” #403 “XXXI,” #409 “XXXVII” and #410 “XXXVIII.”

“Ash vs Evil Dead” — Based on the cult horror franchise, the show finds Ash Williams (Bruce Campbell) once again battling the undead to save mankind. In the second season, Ash returns to his hometown of Elk Grove, Michigan, giving fans an opportunity to find out more about the beloved character. These eight half-hours are provided: #201 “Home,” #202 “The Morgue,” #203 “Last Call,” #205 “Confinement,” #206 “Trapped Inside,” #207 “Delusion,” #208 “Ashy Slashy” and #209 “Home Again.”

“Blunt Talk” — The departing comedy starred Patrick Stewart as baffoonish news anchor Walter Blunt and Adrian Scarborough as his right-hand man Harry Chandler. Here are the eight episodes included within the FYC package: #201 “I Remember That Time More Like a Movie I Saw Than a Life I Lived,” #202 “If It Comes in a Plastic Bag, Don’t Eat It,” #204 “How Is It That Every Conversation We Have Comes Back to the Size of Your Penis,” #205 “It’s Been Months Since I Kidnapped You,” #206 “Love Is Not Linear,” #208 “A Cell Doesn’t Have to Be a Closet,” #209 “Walter Has to Look After Walter” and #210 “Is This All Because I Didn’t Call You?”

Rounding out Starz’s 2017 Emmy FYC mailer are a pair of buzzy limited series — the second installment of “The Missing” and “The White Princess,” a sequel to “The White Queen” — as well as documentary contender “After Spring” about the Syrian refugee crisis.