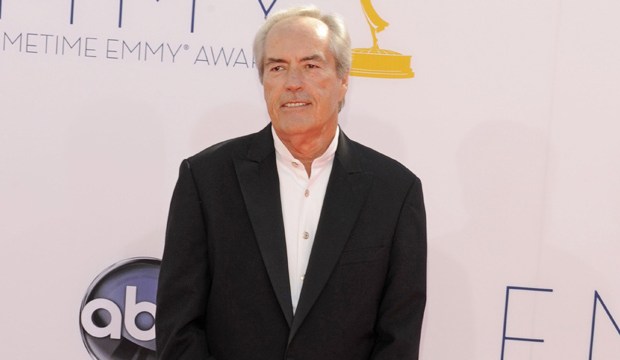 It was announced on Sunday that veteran actor Powers Boothe passed away in his sleep at the age of 68. The actor had accumulated an impressive resume in recent years with TV appearances on “Deadwood,” “Nashville” and “Hatfields and McCoys,” and film roles in “Sin City” and its sequel. But awards nuts will always remember Boothe for his rebellious and controversial Emmy Awards incident in 1980, a moment that was ultimately forgiven by Hollywood.

“This is either the most courageous moment of my career or the stupidest,” declared Boothe when he accepted his Emmy for CBS’s miniseries “Guyana Tragedy: The Story of Jim Jones” amidst a Screen Actors Guild strike. The members of the union were encouraged to boycott the ceremony, but Boothe showed up anyway as the night’s only nominated actor in any category. “I also thought long and hard whether or not I would attend,” Booth continued at the podium. “But I came here because this is America and one must do what one believes. I believe in the academy. I also believe in my fellow actors in their stand.”

In 1980 Boothe was primarily known as a regional theater actor who had appeared once on Broadway in a short-lived play. He had a few film credits to his name and had appeared briefly on a television series with Karl Malden and Piper Laurie called “Skag” which only ran six episodes. Boothe was then cast in the star-making role of Jim Jones, the infamous leader of the People’s Temple cult in “Guyana Tragedy: The Story of Jim Jones.” The miniseries documented the story of a San Francisco religious leader who brought his followers to Guyana in South America where they eventually all partook in a mass suicide ritual that left over nine hundred people (three hundred of which were children) dead.

The miniseries was highly acclaimed and the unknown Boothe was surrounded by an all-star cast including James Earl Jones, Brenda Vaccaro, Diana Scarwid, Levar Burton, Irene Cara, Randy Quaid, Veronica Cartwright and Colleen Dewhurst. The series received four Emmy bids including Best Miniseries and a Best Actor nomination for Boothe where the unknown actor was nominated against such legends as Henry Fonda, Jason Robards and Tony Curtis.

None of the other acting nominees attended the 1980 Emmy ceremony, but when Boothe was named as the winner of his category he surprised many by entering from a hallway door and taking the stage to accept his award in person. His appearance at the Emmys did not seem to hurt his career. The awards triumph, as well as the chilling performance he gave as Jim Jones, launched the actor into a steady career that lasted up until his untimely death this week.

Can Ian McShane ('Deadwood') upset a trio of Oscar-winning movie stars at the Emmys?

'Deadwood': All 36 episodes, ranked worst to best, to celebrate the HBO debut of 'Deadwood: The Movie'…

'Deadwood: The Movie' is about to (Bander)snatch the top spot from 'Black Mirror' in our Emmy…

The wait is over! 'Deadwood: The Movie' premieres in Hollywood: Ian McShane, Timothy Olyphant, David…

Al Swearengen and all your favorite mustaches are back in the first 'Deadwood: The Movie' trailer…