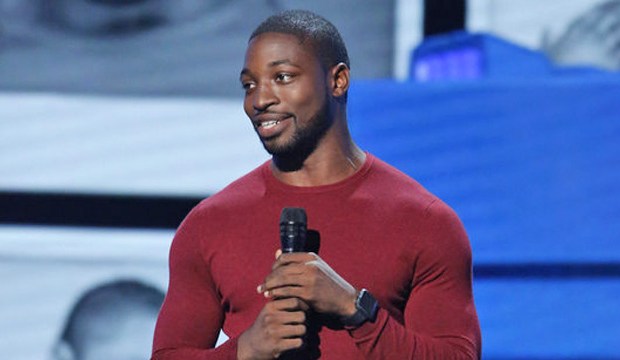 Now that stand-up comedian Preacher Lawson has advanced to the Finals of “America’s Got Talent” 2017, do YOU think the Florida native will win? Shockingly, a comedian has never won the show before (see full list of “AGT” winners), so Lawson could potentially make history if he triumphs in the end. Let us know if YOU think Lawson will prevail by voting in our poll below.

Lawson’s most recent comedy routine was full of self-deprecating humor, including making fun of his big lips, his M.I.A. father, and the fact that he’s single. “I was single for three years,” he began. “You know what I noticed after being single for three years? I noticed the longer I’m single, the lower my standards get. I was really picky in the beginning. Now I’m like, ‘Who needs teeth?'”

The 25-year-old comedian also made fun of host Tyra Banks‘ large forehead, so she got revenge by trying to tape his mouth shut. All four “AGT” judges — Simon Cowell, Heidi Klum, Mel B and Howie Mandel — gave standing ovations at the conclusion of Lawson’s Semifinals performance. The show’s in-house comedian Mandel gave him the best praise of all, declaring, “You are gonna get everything you ever dreamed of, I’m telling you.”

Besides Preacher Lawson, four other acts made it through to the Finals of “Americas Got Talent” 2017: singers Evie Clair and Chase Goehring, ventriloquist Darci Lynne Farmer, and dog act Sara & Hero. These five acts will be joined by the five winning acts from next week’s Semifinals 2 live episodes to become the Final 10 of Season 12.