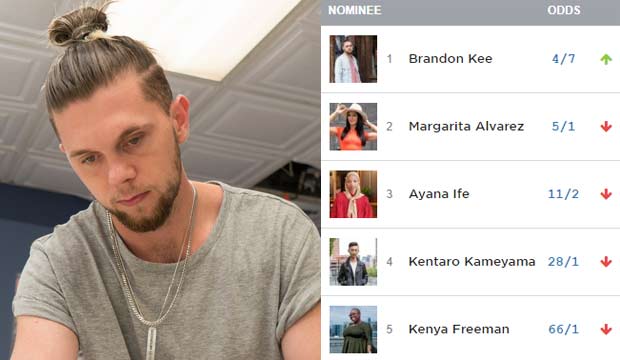 “Project Runway” season 16 is in its 12th week of competition, and Brandon Kee has been the frontrunner for the last nine of those weeks in a row. He shows no signs of slowing down. Quite the opposite: last week’s episode, “Warrior Fashion,” ended with Kee’s third design challenge victory. He’s the only designer this season to have won three challenges, and he has had four other high scores. In addition, he has yet to receive a single low score from the judges, so just looking at the track records of the final five, no one comes close.

As of this writing Kee gets leading odds of 4/7, which translates to a 63% chance of winning the competition. That’s not quite as strong as his odds were last week, but he’s still far ahead of the rest of the field. Holding steady in second place, perhaps surprisingly, is Margarita Alvarez, whom the judges actually decided to eliminate last week but was saved by Tim Gunn. Alvarez gets odds of 5/1, or a 17% chance of upsetting Kee. Perhaps our users think the judges will look on Alvarez’s work more favorably now that she has Gunn’s seal of approval.

This week’s greatest gainer is Ayana Ife in third place with odds of 11/2, or a 15% chance of winning. Those are her best odds of the entire season, and it’s easy to see why. She has won two design challenges, including just two weeks ago in “Driving Miss Unconventional,” and though she hasn’t received high scores as consistently as Kee, she has also never received a low score from the judges after 11 weeks of competition.

Do you agree that Kee is still the frontrunner to win? Are we underestimating Ife? Check out the graphs below to see how the momentum has changed throughout the season. Click on them to see more detailed prediction stats for tonight’s episode. 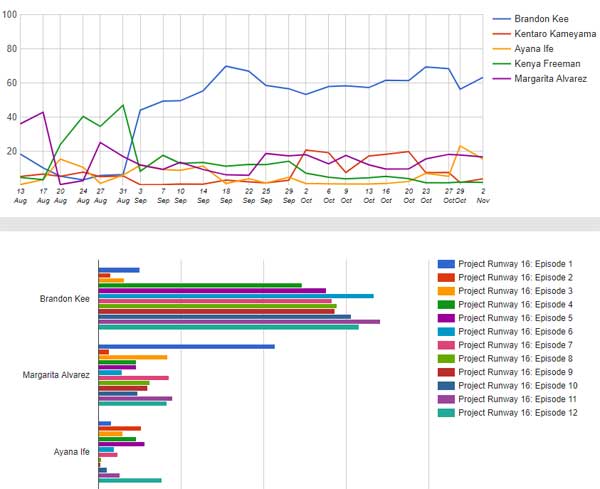