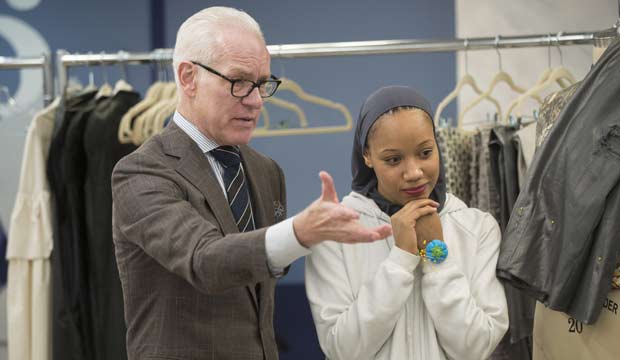 On Thursday night’s part 1 of the “Project Runway” season 16 finale, host and mentor Tim Gunn traveled, as is tradition, to the hometowns of the final five designers as they prepared collections for New York Fashion Week. Five finalists is the most the series has ever had, so of course there was a catch: although all five would receive $10,000 to design a 10-look collection, only three of them were guaranteed to actually bring that collection to NYFW (with the potential for more if their designs merited it). So which of the finalists earned those coveted spots? Read our recap below of season 16, episode 13, “Finale Part 1,” to find out, and then give us your reactions below in the comments.

To decide which three designers would show at NYFW, Heidi Klum gave the finalists their last challenge: each would choose two looks from the collection they design to serve as a preview and to help convince the judges that their collections are deserving of a spot in the finale. With that, Tim and Heidi sent the designers home to create their collections. Kentaro Kameyama to Los Angeles, Kenya Freeman to Atlanta, Brandon Kee to San Francisco, Margarita Alvarez to San Juan, and Ayana Ife to Salt Lake City.

While in Salt Lake City, Ayana showed Tim what she called an “earthy” and fully modest collection. She was inspired by things like forget-me-nots and birch trees, which informed a color palette of beiges and greens as well as floral prints and lace. Tim’s advice to her was that she needed to raise the bar and go further into the ath-leisure lane that she was headed down.

In Atlanta, Kenya’s collection was inspired by the ocean, sand and the sun. She showed Tim some lovely and sophisticated dresses in coral pink, but he was worried that the colors were “somber” and “underwhelming” and urged her to find something more saturated in color to balance it out. It didn’t help that Kenya expressed that she’d reached a creative block with her final designs, but Tim’s advice seemed to inject some new ideas into her mind and she was excited.

During his visit to Los Angeles, Tim saw Kentaro’s classical music-inspired collection complete with pleating, cut-out tops, large sleeves and denim. Tim and Kentaro found out they were on different pages because after Tim told him that he had designed three different collections Kentaro said that he didn’t want to create something “too cohesive.” Kentaro was worried about being too boring, but Tim warned him that cohesion is not boring if the designer is doing it right.

Down in San Juan, Margarita showed Tim massively colorful work of knits, patterns, and a self-designed print all drawn from her memory of a couch her parents had when she was a kid. Tim had a mostly positive response to her choice in textiles, but when it came to a gold ring adornment she was using in a number of designs he warned her that it was having a “cheapening effect” and could turn her collection into a “sinking ship.”

And finally, in San Francisco, Brandon unveiled a lot of garments made from a home furnishing fabric with a flamingo print on it. Of all the home visits, Tim was most positive about Brandon’s, calling it “smashing” multiple times and telling him that he was well on his way to creating something memorable.

Back in New York, Tim checked in with the designers one last time to help them decide which two looks they’d preview to Heidi, Zac Posen and Nina Garcia. Kenya received harsh critiques from Heidi and Nina who saw fit and styling issues. All three judges were impressed with the looks Ayana chose to show, calling them luxurious and emotional and saying that they were intrigued enough to want to see more. With Kentaro’s looks they were split, loving one and not really liking the other and echoing Tim’s concern that his vision wasn’t coming across and there was a lack of cohesion.

As to be expected, the judges were over the moon about Brandon’s pieces, but thought one was sloppy while the other one was crisp and perfectly styled. With Margarita’s looks they were impressed by her ability to take risks with color and texture, but were equally concerned that she had over-styled her models and needed to scale back from the tropical aesthetic so that it was a more versatile collection.

For their decision of which three designers would move on to show at Fashion Week, the judges were pretty confident that both Brandon and Ayana deserved two of the spots. Between the other three, they recognized Margarita’s exuberance, were frustrated by Kentaro’s inconsistency and believed Kenya had more potential than she showed them in the preview. In the end, the judges decided that only Kenya wasn’t ready to show at NYFW, meaning Brandon, Ayana, Margarita and Kentaro would all advance to compete for the win in next week’s “Finale Part 2.”

Here are the answers to Gold Derby’s predictions event questions for “Project Runway” #16.13:

Who will be eliminated? Kenya Freeman

Who will be in bottom 2, but safe? Kentaro Kameyama

Who will win the challenge? No one

Who will be challenge’s runner-up? No one

Will Tim Gunn use his save? No