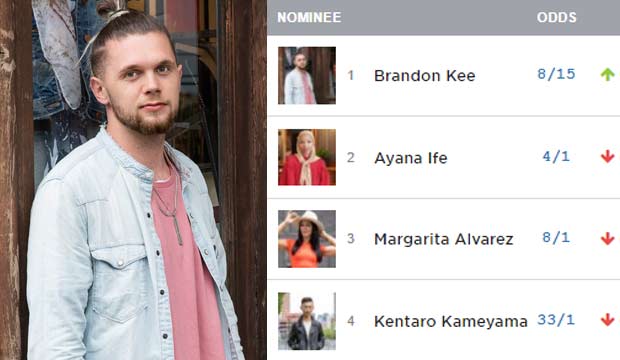 “Project Runway” ends its 16th season tonight after weeks of fashion triumphs and catastrophes, and most of our users predict, as they have been for most of the season, that Brandon Kee will win the competition. But even though he won more design challenges than anyone else, earned more high scores from the judges than anyone else, and never spent a single week among the lowest-scoring designers, there’s still room for an upset. But how much room?

As of this writing Kee gets leading odds of 8/15, which translates to a 65% chance of prevailing. That’s a pretty big lead, but it’s actually not his biggest lead. His strongest position was actually in week 11, “Warrior Fashion,” when he had 4/9 odds, or a 68% chance of winning. He’s been hovering around there ever since with some users consistently skeptical about his chances. In “Finale, Part 1” he showed the judges a two-look preview of his 10-look collection, and they were predictably impressed by his unique artistic voice, but will there be enough variation in his other eight looks to keep them interested throughout?

If not, we could see an upset by Ayana Ife, who also never had a low-scoring design with the judges. She ranks second with 4/1 odds, which translates to a 21% chance of winning. That’s up significantly from just last week when she had 13/2 odds, or a 14% chance of winning. Ife also has a singular style — inspired by her Muslim faith, she designs only modest clothing. Her two-look preview of her collection also showed significant growth and variety, which could give Kee’s collection a run for its money.

That leaves Margarita Alvarez, recipient of the Tim Gunn Save, ranked third with 8/1 odds (11% chance of winning), while Kentaro Kameyama, after getting mixed reviews for his two-look preview, is the ultimate underdog with 33/1 odds (3.1% chance of winning).

Check out the graphs below to see how the final four designers have progressed in our predictions throughout the season. Click on them to see more detailed prediction stats for tonight’s season finale. 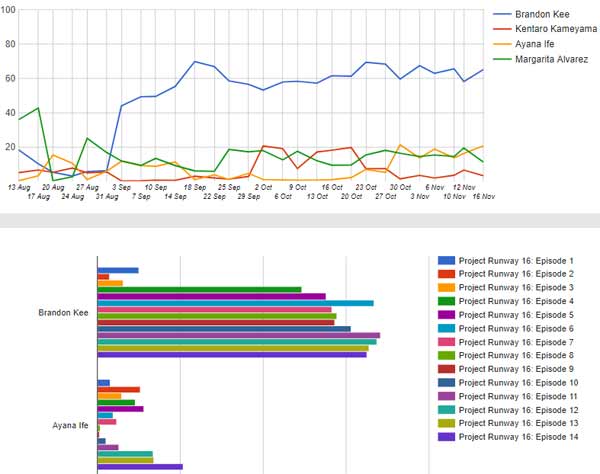