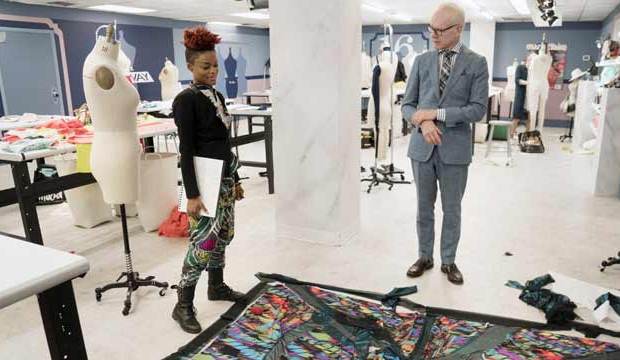 Week three of “Project Runway” season 16 asked the remaining 14 contestants to take “A Leap of Innovation!” Specifically, the designers were tasked with creating a look inspired by the upcoming animated film “Leap!” about the world of dance, and thus create looks inspired by dance, movement, and innovation. It worked better for some than others. After two weeks safely through, Kudzanai Karidza took risks with bold colors and mix-and-match concepts so the judges would take notice … They did, and eliminated him. But who who really had the best design of the night? Vote in our poll below.

Host Heidi Klum and her fellow judges Zac Posen, Nina Garcia, and guest judge Maddie Ziegler were head over heels for Brandon Kee‘s detailed work on an elaborate, one-of-a-kind design, and he won the design challenge. Do you think the judges got it right by picking him as this week’s winner? He’s had a great run on the show in its first three weeks. He’s the only competitor to score high in every week of the competition thus far.

Batani-Khalfani got one of the highest scores for the second week in a row, after finishing in the bottom two in the season premiere episode. She designed a brightly colored look inspired by wings in flight. And Margarita Alvarez got a high score for the first time this season: Tim Gunn was initially concerned that her dress inspired by Bomba dancing from Puerto Rico would look too much like a costume, but she had a clever idea to reverse the dress, turning the revealing back into the front, and it paid off.