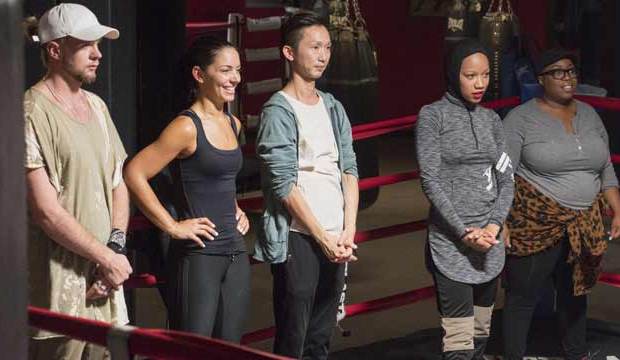 On Thursday night’s all new episode of “Project Runway,” five designers remained in the competition to earn their spot at Fashion Week and hope to be named the future of fashion. For this week’s challenge the designers met a group of cancer survivors, known as “Warrior Women,” whose stories of battling the disease with strength would serve as their jumping off point for their looks. Each designer was asked to create a high-fashion editorial look inspired by an interpretation of the phrase “warrior women.” Which of the top five rose to the occasion and will continue on to compete for a spot in the finale? Read our recap below of season 16, episode 11, “Warrior Fashion,” to find out, and then give us your reactions below in the comments.

After meeting with host Tim Gunn and the challenge sponsor Avon, the designers headed to Mood to shop for materials. Brandon Kee and Kenya Freeman both used the looseness of the objective as a chance to take some of the judges’ criticisms to heart: Brandon decided to elevate his textile choice to something more luxurious than he’s used in the past and Kenya opted for bright fabrics instead of the all black she used last week.

Because her grandmother passed away from breast cancer, Margarita Alvarez had a personal connection to the challenge and envisioned a dress as a metaphor for the support system that women develop when battling cancer. Her idea was to have a red organza dress held together by a corset, but during critiques Tim questioned whether the gold corset she designed for it made the gown feel to costumey. After some thought, she and Tim decided to stand by her vision since it was a clear representation of who she is as a designer.

Elsewhere in the workroom, Ayana Ife got a highly coveted “This could be a wow moment” reaction from Tim for her ruffled top and striped pants. And later Brandon expressed to her how great the design was and confessed to the camera that she was stiff competition. Kentaro Kameyama had a tougher time finding the right statement to make for his look and spent most of the first workday hoping that if he just kept creating that eventually something would speak to him. Things were looking up for him when Tim gave him a positive critique on his work-in-progress, but after a fitting with his model he had to start over because the sweater he had made was too small.

Joining series judges Heidi Klum, Zac Posen and Nina Garcia to rate the looks on the runway was actress Rachel Brosnahan. This week their scores were, as Heidi put it, “all over the place,” with each judge preferring and disliking different looks than the others. One design they all loved was Kenya’s bright blue petal dress. Nina was most impressed by the way that power was displayed in every aspect from color to design. Once again the judges loved Brandon’s sense of style and his signature embellishments of buckles and straps, but were divided on the inclusion of a bonnet on the models head.

Margarita’s concept of “controlled chaos” was the star of her design, but unfortunately not all the judges understood the execution of it. Kentaro’s all-black look came under fire with Nina and Rachel because it wasn’t editorial and upon closer consideration was questioned for being too similar to Brandon’s. Zac and Rachel found Ayana’s pants and top impeccably tailored and Heidi was blown away by how sexy her model looked even in an androgynous, fully-covered outfit.

While the judges inspected the garments up close, Tim was perplexed by the negative comments directed toward the two bottom looks of the week–Margarita’s and Kentaro’s. Unlike the judges, Tim loved both looks. With Margarita and Kentaro on the bottom and the judges most pleased with Brandon and Ayana’s looks, Kenya was the first to be called safe. Next, the judges declared Brandon the challenge winner, his third for the season, and Ayana as the runner-up. Between Margarita and Kentaro, the judges deemed Margarita’s gold corset worst and chose her for elimination. Luckily, Tim believed enough in Margarita’s talent and her look this week that he decided to use his save to keep her in the competition.

That means five designers still remain in the hunt for the win and next week the judges will decide which of them will advance to compete at New York Fashion Week.

Here are the answers to Gold Derby’s predictions event questions for “Project Runway” #16.11:

Who will be eliminated? No one

Who will be in bottom 2, but safe? Kentaro Kameyama

Who will win the challenge? Brandon Kee

Who will be challenge’s runner-up? Ayana Ife

Will Tim Gunn use his save? Yes