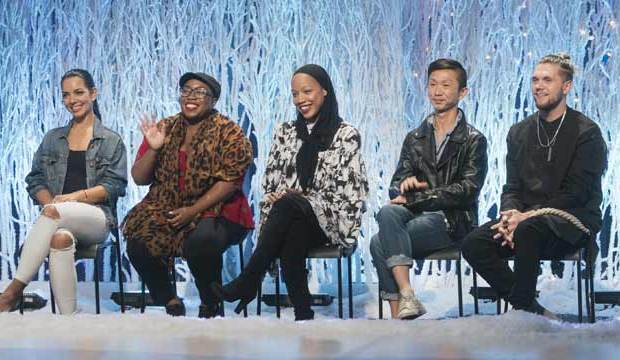 On Thursday night’s all new episode of “Project Runway,” after host and mentor Tim Gunn saved Margarita Alvarez from elimination in “Warrior Fashion,” five designers remained in the competition to earn their spot at Fashion Week and hope to be named the future of fashion. For the last regular challenge of the season the designers were tasked with creating a high fashion winter look. So which of the designers heated up the runway and advanced to the finale? Read our recap below of season 16, episode 12, “There’s Snow Business Like Sew Business,” to find out, and then give us your reactions below in the comments.

To help get the designers in the mood for the challenge, Tim took them to an ice bar where the temperature was below freezing and the bar itself was made of ice. Here is where they sketched their ideas for the challenge — Ayana Ife used the opportunity to make her first coat of the season while Brandon Kee felt his existing style of oversized outerwear already lent itself well to the task. Later while shopping for materials at Mood, Kentaro Kameyama decided on a beige fabric and contrasted it with a bright yellow, and Kenya Freeman, looking for her first challenge win of the season, settled on a loud tangerine, beige and black patterned-wool fabric.

Margarita’s plans got off on the wrong foot when after the allotted time to shop had expired, Tim pointed out that because the show is a fur-free series she would have to return the rabbit fur she’d picked for her design. Luckily for her, Tim and the other designers agreed to give her an extra five minutes to replace the textile since the rule hadn’t been expressly announced prior to her purchase of it.

During critiques, Tim and Kentaro decided against him using his yellow fabric and doubling down on his neutral palette style by only working with the beige material. Reminding her that she has yet to win a challenge, Tim urged Kenya to push herself in terms of innovation and to answer the question, “Who are you as a designer?” But on the opposite side of things, Ayana was pushing too many boundaries so Tim advised her to scale back from her idea of painting on her fabric. Unsettled by losing the rabbit fur she wanted, Margarita was in a funk and struggling to reimagine what she had planned.

Joining the series judges Heidi Klum, Zac Posen and Nina Garcia to score the runway this week was actress Katie Holmes. The “street luxe” of Brandon’s look was a hit with the entire panel and they all felt like he hit the nail on the head in terms of bringing his aesthetic into the winter time. The fur dress that Margarita came up with was a hit with Heidi, but her wrap coat was the star of the look. Nina liked Ayana’s use of color in her coat, but the jumpsuit that she made for underneath the coat was childish and costumey according to Heidi. Kenya tailored and fit her garments perfectly, but Zac felt like the styling wasn’t high-fashion enough. But of all the looks, the judges were most blown away by the simplicity and uniqueness of Kentaro’s.

When asked by the judges who they would bring to Fashion Week with them, both Kentaro and Brandon named each other as well as Ayana because of how her vision is so different from their own. Kenya thought that both Ayana and Brandon pushed boundaries and deserved a spot in the finale. Margarita chose Brandon and Kentaro while Ayana chose Brandon and Kenya, both stating the designers they’d take are people that pushed them to work harder. It did not go unnoticed by Margarita that no one selected her as someone who earned a place in the finale.

With the decision of who goes to Fashion Week and who doesn’t before them, the judges heeded the advice of the contestants themselves and chose all of Kentaro, Brandon and Ayana to advance as finalists. That left Margarita and Kenya on stage, expecting to hear that one of them would be eliminated, but instead the panel chose to send them both forward.

Next week we’ll watch as Tim travels to the five designers’ homes where they’re each creating their 10-piece collection, but Heidi warns them that only three of them will actually get the chance to show at New York Fashion Week.

Here are the answers to Gold Derby’s predictions event questions for “Project Runway” #16.12:

Who will be eliminated? No one

Who will be in bottom 2, but safe? Kenya Freeman and Margarita Alvarez

Who will win the challenge? No one

Who will be challenge’s runner-up? No one

Will Tim Gunn use his save? No