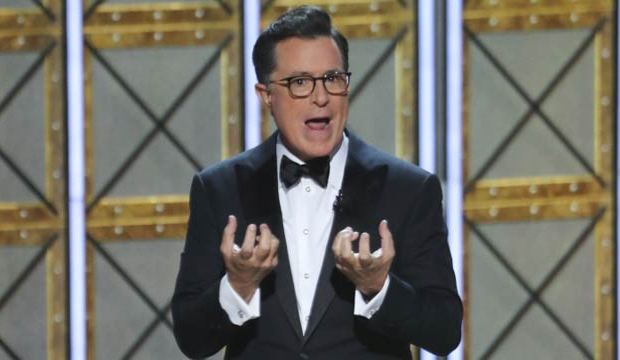 Late-night host Stephen Colbert took his first turn at bat as host of the 69th Primetime Emmy Awards on Sunday night. The Emmy-winning host of “Late Show with Stephen Colbert,” who has emceed the last three ceremonies for the Kennedy Center Honors, presided over a smoothly paced Emmy ceremony while managing to throw in a few jabs at his favorite target, Donald Trump. But we want to know what you thought of Colbert’s first go-round as host. Vote in our poll below (and check out the complete list of Emmy winners here).

Colbert opened the ceremony with a musical number featuring a veritable who’s who of television, including Anthony Anderson, Allison Janney, Julia Louis-Dreyfus, and the casts of “Veep,” “Stranger Things,” and “This Is Us.” Colbert then danced his way onto the Emmy stage surrounded by a chorus of high-kicking handmaids. His monologue featured jokes about the rivalry between streaming services and broadcast television, as well as several jokes at Trump’s expense. The monologue was capped off by a surprise appearance by former White House Press Secretary Sean Spicer, much to the astonishment of the Emmy audience, including Comedy Guest Actress winner Melissa McCarthy, whose impersonation of Spicer figured heavily in her win for “Saturday Night Live.”

Colbert appeared in a few taped segments throughout the show, including an interview with the Emmy statue itself, played hilariously by two-time Emmy winning host RuPaul Charles. Then after losing the Emmy for Variety Talk Series to John Oliver, Colbert drowned his sorrows in a very funny interaction with last year’s Emmy host and fellow also-ran Jimmy Kimmel.

So what did you think? Vote below, and make sure to check out some of the best backstage moments and our review of the whole telecast.