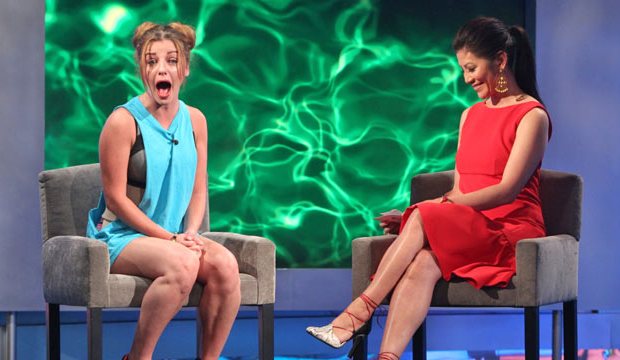 A devastated Raven Walton instantly wept when she learned that she was the second victim of Thursday night’s double eviction episode of “Big Brother.” But as soon as she exited the toxic house she was all smiles as she did a cartwheel followed by a high kick on her way to meet host Julie Chen. Proving you never know what you’re going to get from “Arkan-Sassy,” that may have been her most memorable moment of Season 19.

Was Raven shocked that the house evicted her over Kevin Schlehuber? “Yes and no. I understand why they’re keeping Kevin around. Hello! Not much going on there,” Raven noted, feeling he had not played the game. Julie immediately fired back, stating that Raven had cuddled with Matt Clines all summer, so we didn’t actually see her play the game either.

Raven did not appear offended by the shade Julie had just tossed in her direction, responding, “I played the game very well. I had Paul Abrahamian in my corner. I threw competitions for Paul. Matt and I were doing our best; we had a great social game. Everyone liked us.”

But would she have done anything differently if she were to do it again? “I don’t have any regrets; I would have gone in the house and would have done the same thing I did.” Evicted but with her ego intact, Raven was certain the house had to get rid of her because she would have otherwise won the game. “I understand with my story and everything they probably wouldn’t want to take me to the final two.”

Ultimately, Raven hoped her appearance on CBS’s reality TV show would bring awareness to a rare condition she has called gastroparesis, a disorder in which the stomach cannot empty itself of food in a normal fashion. She will now reconnect with her showmance partner Matt in the “Big Brother” jury house along with previously evicted houseguests Cody Nickson, Mark Jansen, Elena Davies and Jason Dent.