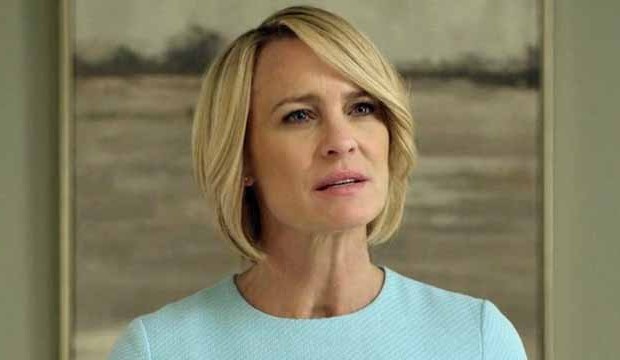 Gold Derby can exclusively reveal that Robin Wright is entering the “House of Cards” episode “Chapter 65” as her Emmy submission for Best Drama Actress. This installment streamed May 30 and was the 13th and final episode of the 5th season for the Netflix show. In this segment, Frank Underwood (Kevin Spacey) suddenly and shockingly resigns as U.S. President, which makes his wife and Vice President Claire Underwood (Wright) extremely angry since he didn’t tell her in advance. She reveals to him that she murdered author and secret lover Tom Yates (Paul Sparks). Will she now pardon the ex-President for his crimes or does it set up a battle between the husband and wife for next season?

Wright only has one past Emmy winner in her category this year — Viola Davis (“How to Get Away with Murder”) — with Tatiana Maslany (“Orphan Black”) taking a break with no new episodes this past season. They are contending against previous nominees Elisabeth Moss (“The Handmaid’s Tale”), Keri Russell (“The Americans”), and Evan Rachel Wood (“Westworld”), plus first-timer Claire Foy (“The Crown”).

She has two nominations this year for acting and producing the Best Drama Series contender. Those go along with her past four bids for her performances and another for the series category. She has one Golden Globe win for this role in four nominations.