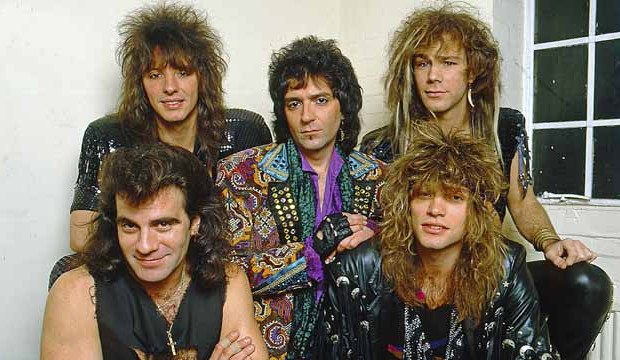 Bon Jovi won our recent poll about which band should be inducted into the Rock and Roll Hall of Fame. And now the New Jersey rockers headline a long list of 19 nominees announced Thursday for possible induction at the 2018 ceremony. A small list of final inductees to be honored next April in Cleveland will be chosen from this group and announced in December.

While Bon Jovi has been on this ballot before, there are nine nominees this year who are competing for the first time: Eurythmics, Dire Straits, Judas Priest, Kate Bush, The Moody Blues, Nina Simone, Radiohead, Rage Against the Machine, and Sister Rosetta Tharpe. Radiohead and Rage released their first recordings in 1992, so this year marks their first time being eligible after the mandatory 25 year wait period.

The other artists on the 2018 ballot are The Cars, Depeche Mode, J. Geils Band, LL Cool J, MC5, The Meters, Rufus featuring Chaka Khan, Link Wray, and The Zombies.

While Bon Jovi won our recent band poll, the runner-up was not so fortunate to be a Hall of Fame finalist. The Monkees finished in second place and have never been considered by the voters. Other bands overlooked this time are Blood, Sweat and Tears, Boston, The Commodores, The Doobie Brothers, Foreigner, and Styx.

We also had recent polls about snubbed male artists and female artists, and many of them (other than LL Cool J) remain on the outside. Jimmy Buffett and Phil Collins were on top of our solo male poll and are again disappointed along with Joe Cocker, Billy Preston, Lionel Richie, Sting, and Warren Zevon. Snubbed female singers include your favorites in the poll — Pat Benatar and Janet Jackson — along with Cher, Melissa Etheridge, Whitney Houston, Carole King, Cyndi Lauper, Stevie Nicks, and Tina Turner.