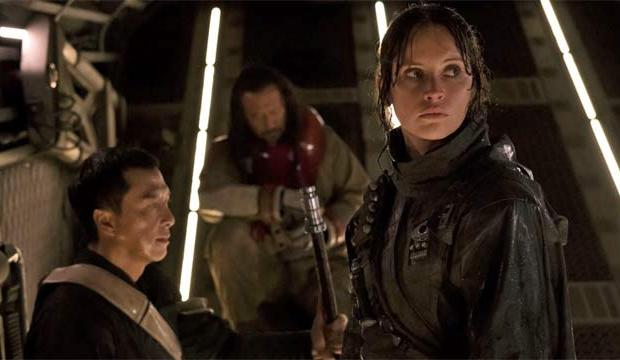 Disney, that ever-expanding force to be reckoned with in Hollywood, has had a very good year with its films grossing over six billion dollars. And with films such as “Spider-Man: Homecoming” and “Guardians of the Galaxy 2” coming out in 2017 things are only going to get better with the bottom line.

But can these movies that rake in all that green do as well with the gold of the Oscars? Have they got any real chance of picking up some major prizes? Or will they have to settle for a Sound Mixing nomination here and a Production Design bid there? Below is a list of the Disney films which could theoretically pick up nominations and wins, and in what categories.

“Rogue One: A Star Wars Story” – Four nominations
This stand-alone entry in the fabled film franchise currently sits in second for both Best Sound Editing and Best Visual Effects on our exclusive odds chart. “Rogue One” is third for Best Sound Mixing and should also reap a Best Original Score bid for Oscar-winner Michael Giacchino (“Up”). And it has an outside chance at at a nomination for Best Production Design.

“The Jungle Book” – Three nominations, one win
Jon Favreau’s live action remake of this animated classic is the favorite to win Best Visual Effects and is ranked fifth for both Sound Mixing and Sound Editing. And it could surprise in both Best Original Score (currently in seventh) and Best Production Design (sitting in sixth).

“Moana” – Two nominations
Lin-Manuel Miranda, the creative genius behind “Hamilton,” is a close second in Best Original Song for ‘How Far I’ll Go’ (behind ‘City of Stars’ of “La La Land”). And “Moana” is ranked third on our Best Animated Feature chart.

“Zootopia” – One nomination, one win
“Zootopia,” or “Zootropilis” if you’re from Blighty, is the clear frontrunner for Best Animated Feature. It’s in sixth place for Best Original Song and also has a shot at Best Original Screenplay where it is currently ranked eight.

“Finding Dory” – One nomination
This sequel to the 2003 Oscar-winning “Finding Nemo” is expected to just squeak into Best Animated Feature where it sits in fifth on our chart.

UPDATED: Oscar predictions by experts in all 24 categories

“Doctor Strange” – One nomination
The most recent installment of the Marvel Cinematic Universe is currently ranked third for Best Visual Effects. Disney is owning that category, by the way, with the top three predicted films.

“Piper” – One nomination, one win
This adorable six-minute film from Pixar played before “Finding Dory.” This sweetest of the contenders is the favorite to win Best Animated Short.

“Captain America: Civil War” – Zero nominations
Despite its critical success and awards-worthy aspects, this Marvel movie is ranked only seventh for Best Visual Effects and that’s all, folks.

“The BFG” – Zero nominations
Steven Spielberg’s adaptation of Roald Dahl’s classic is likely to be blanked despite the presence of a soon-to-be-Sir Mark Rylance in the lead role. It could sneak into Best Original Score (its ranked sixth) and perhaps might surprise in Best Visual Effects.

Be sure to make your Oscar predictions. Weigh in now with your picks so that Hollywood insiders can see how their films are faring in our Oscar odds. You can keep changing your predictions right up until just before nominations are announced on January 24 at 5:00 am PT/8:00 am ET. Be sure to read our contest rules. And join in the fierce debate over the Oscars taking place right now with Hollywood insiders in our forums.

'Outlander,' 'Rogue One,' 'Westworld' and 'Doctor Strange' among big winners at 2017 Saturn…

New to Netflix in July: Streaming service to add 'Rogue One: A Star Wars Story,' 'Lion' and much…

'Star Wars' 40th anniversary: Vote for your favorite, from 'A New Hope' to 'Rogue One'…