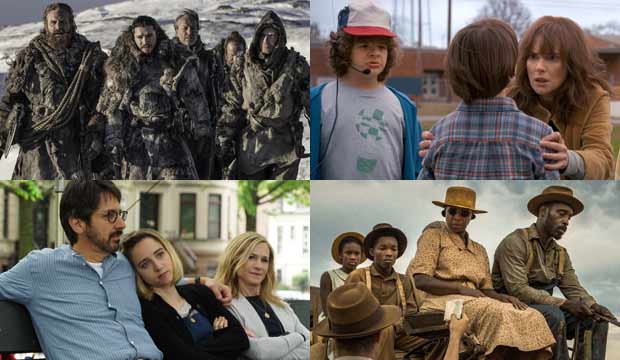 As a general rule the biggest casts usually win at the SAG Awards. Since SAG-AFTRA voters pick the best ensembles for their top awards and not the best TV shows or movies, per se, we often see the largest rosters of actors win, which explains victories for TV shows like “Orange is the New Black” and “Downton Abbey” and movies like “Gosford Park” and “The Help.” But then how does a show like “Game of Thrones” keep losing? That epic fantasy series seems to hire most of the living actors in Europe, but it has never won a SAG Award except for its stunt ensemble, which is undefeated. There may be another factor in predicting SAG Award winners: acting together.

“Game of Thrones” has one of the biggest ensembles on TV by far, but those actors are often divided between a half dozen or so different storylines in a wide range of locales to the point where two of the show’s biggest stars, Kit Harington and Emilia Clarke, didn’t meet on-screen until season seven. Compare that to “Downton Abbey,” which also had a large cast but brought them together constantly in group scenes for dinners, family functions, and other gatherings. They’re a big ensemble, but they also act as an ensemble. That may have also contributed to the surprise victory for “Stranger Things” last year: it had a smaller cast than some of its rivals, but the actors are on the show were well known for their group chemistry — especially the child stars, who frequently appeared at public events together.

This factor might help explain some other SAG Award winners with uncharacteristically small casts, like the films “Sideways” (2004) and “Little Miss Sunshine” (2006), as well as surprise nominees like “Hustle and Flow” (2005) and “Captain Fantastic” (2016), all of which featured tight-knit groups sharing lots of scenes together. For that matter, the smallest ensemble ever nominated by the SAG Awards, the TV sketch comedy “Key and Peele,” had only two actors in it — creators and stars Keegan-Michael Key and Jordan Peele — but they were in almost every scene together.

This year most of the nominated film ensembles are distinguished by strong family dynamics: “The Big Sick” (interracial blended families) “Get Out” (the family from hell), “Lady Bird” (teenager clashes with her working-class family) and “Mudbound” (two families conflict in the Jim Crow South). Even “Three Billboards Outside Ebbing, Missouri” has a family component, as Frances McDormand clashes with her son (Lucas Hedges) and ex-husband (John Hawkes) while mourning her daughter.

On the TV side this factor could benefit the “This is Us” family and the rag-tag team of pro wrestlers on “GLOW.” Maybe it could even help “Game of Thrones” at last; as the HBO epic fantasy series nears its conclusion its characters intersected more than ever this past year.

So which shows and movies do you think benefit the most from the togetherness factor? Or is this really a factor at all?