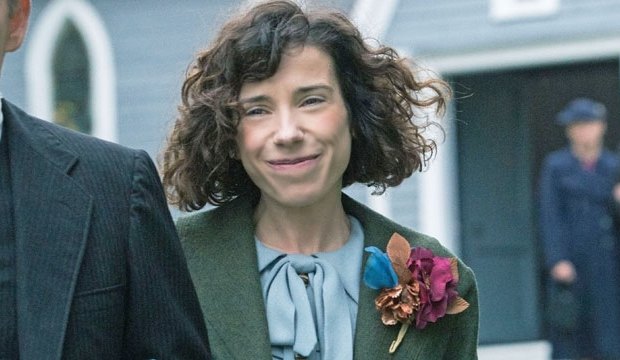 Sally Hawkins is emerging as an early Best Actress candidate at the 2018 Oscars for her role in the film “Maudie.” Directed by Aisling Walsh, “Maudie” tells the true story of the humble beginnings of artist Maud Lewis, who was afflicted with arthritis at a young age and lived in poverty in Nova Scotia in the early 1900s. Lewis is forced to take a job as a cleaning lady for a local misanthrope (played by Ethan Hawke, who’s also earning strong notices) before she eventually begins to get recognition for her art.

The actress has been receiving excellent reviews for her performance, including from Richard Roeper (Chicago Sun Times) who declares, “Hawkins disappears into the performance, capturing Maud’s physical limitations but also the light in her eyes, the sly humor in her observations about life — and her gift for seeing the greatest beauty in the simplest things.” Thelma Adams (Observer) continues the praise, writing, “Aisling Walsh’s shimmering drama hands Sally Hawkins an Oscar-worthy role in an emotional and inspirational biopic about art, love and this cruel beautiful world of ours.” And Tomris Laffly (Time Out) raves, “As unassuming and gentle as its subject, Maudie breaks your heart with its infectious positivity and an outstanding Sally Hawkins, who can always be relied on for an emotionally sturdy, big-hearted performance.”

Hawkins has had an interesting Oscar history. She was much lauded for her work in the Mike Leigh film “Happy-Go-Lucky” (2008) and won the Golden Globe and the New York Film Critics’ Circle Best Actress award for that film, but when Oscar nominations came out that year she was surprisingly absent from the list. With the exception of “Secrets and Lies,” Leigh’s films have often had trouble getting Oscar nominations for their actors. Hawkins’ character in the film may have also been a bit too irritating for voters to accept.

Hawkins bounced back a few years later when she was a bit of a surprise nominee for her work in Woody Allen’s “Blue Jasmine.” Lead actress Cate Blanchett was sweeping up all the early precursor awards for the film while Hawkins was overlooked for a SAG nomination.The academy noticed Hawkins’ performance and granted her a nomination for her role which was basically the equivalent of the Stella character in “A Streetcar Named Desire,” while Blanchett was playing the equivalent of Blanche DuBois.

Should the early buzz hold up, Sally Hawkins may be looking at Oscar nomination number two.