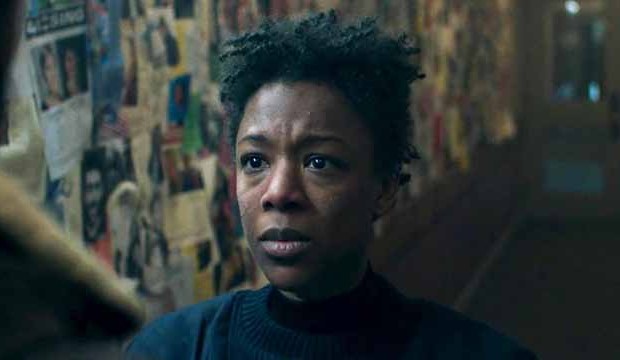 Fans of Hulu’s “The Handmaid’s Tale” rejoiced when Samira Wiley snagged a surprise Emmy nomination as Best Drama Supporting Actress for “The Handmaid’s Tale.” It was the first career bid for the actress, who competes for playing Moira, a woman forced into prostitution by an oppressive, cultish dictatorship in the streaming hit. She has submitted the Season 1 finale, “Night,” for Emmy consideration.

In this episode, Moira escapes the underground brothel at which she’s held captive and crosses the border to Canada, where she’s greeted with kindness and care. She has a tearful reunion with Luke (O-T Fagbenle), the husband of her best friend (Elisabeth Moss), who has been sold to a wealthy family to act as a broodmare.

Can Wiley win for this episode? Let’s take a look at the pros and cons:

Not only is last year’s winner, Maggie Smith (“Downton Abbey”), absent from the category, but so are all last year’s nominees (Emilia Clarke, Lena Headey and Maisie Williams for “Game of Thrones,” Maura Tierney for “The Affair” and Constance Zimmer for “UnReal”). The only former Emmy victor in the bunch is Wiley’s “Orange is the New Black” costar Uzo Aduba. Can a rookie contender like Wiley, Millie Bobby Brown (“Stranger Things”), Ann Dowd (“The Handmaid’s Tale”), Chrissy Metz (“This Is Us”) or Thandie Newton (“Westworld”) win on their first bid?

Between her roles in “The Handmaid’s Tale” and “Orange is the New Black,” Wiley has had a lot of exposure this year. Voters were impressed enough to nominate her, so will they now feel inclined to vote for her to win?

“The Handmaid’s Tale” was one of the breakout shows of this season, tapping into viewers fears of the future following the election of Donald Trump and snagging 13 Emmy nominations, including for Best Drama Series. It’s a frontrunner to win several prizes, including Best Drama Actress (Moss), so Wiley could get carried along in a sweep.

SEE Samira Wiley (‘The Handmaid’s Tale’): ‘I feel like the luckiest girl in the world!’ [EXCLUSIVE VIDEO]

Wiley could split the vote with costar Dowd, swinging the prize to another contender. And both could face an uphill battle as “The Handmaid’s Tale” may hit too close to home for some viewers, reminding them too much of current events under Donald Trump‘s America.

Emmy voters love repeats, and with so many newcomers in the bunch, they may just default to two-time winner Aduba.