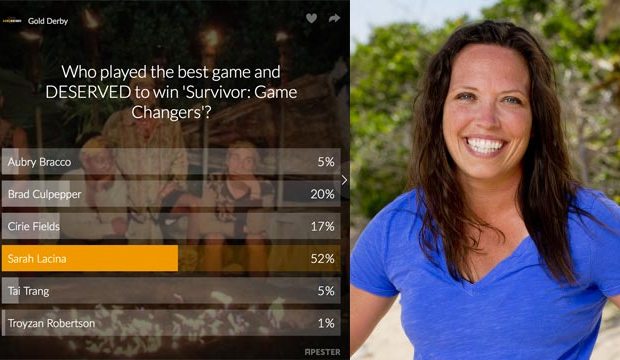 Did the right person win “Survivor: Game Changers”? According to 52% of the people who voted in our post-finale poll, the answer is a resounding yes. Sarah Lacina took home the $1 million check Wednesday night in a 7-3-0 vote against runner-up Brad Culpepper and third-place contender Troyzan Robertson. And Sarah also trounced them in our poll, with 20% saying Brad deserved to win and Troyzan only nabbing 1% support.

While 17% thought that Cirie Fields deserved to claim victory on her fourth try, she did come away from the game with a record of her own: she’s the longest-playing woman in “Survivor” history. Rounding out our poll, there was a tie at 5% apiece between former “Kaoh Rong” teammates Aubry Bracco and Tai Trang.

Gold Derby chatted with Sarah moments after her much-deserved win at the Season 34 finale at CBS Television Studios — watch our exclusive interview here. On the red carpet, Sarah told us that she feels “complete relief right now” after finally knowing that all of her hard work paid off. She also admits that she was “like 90% sure” she was going to be named the winner, but it still was a pleasant surprise for her to join the “Survivor” winners list.

Next season’s landmark 35th edition, titled “Survivor: Heroes v. Healers v. Hustlers,” was once again filmed in Fiji. (Watch the trailer right here.) Due out this fall on CBS, the season will feature a cast of entirely new contestants — a stark contrast to “Game Changers” which pit some of the most notorious players of all time against each other.