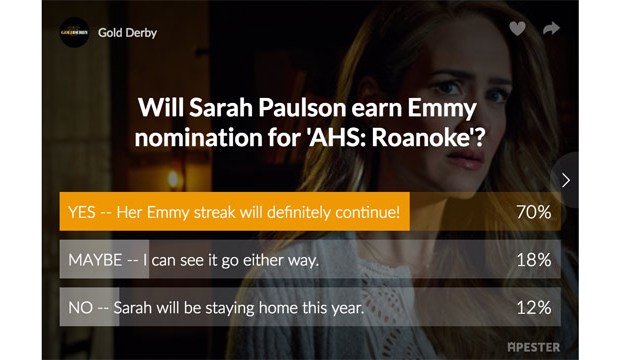 In our recent fan poll, a whopping 70% voted that Sarah Paulson‘s awards streak will continue and that she’ll earn her seventh straight Emmy bid, this time for “American Horror Story: Roaonke.” Paulson is earning Emmy buzz for her latest “AHS” role(s) as “My Roanoke Nightmare” character Shelby Miller, British actress Audrey Tindall, and “Asylum” fan-fave Lana Winters. But what do the Emmy experts think will happen in this year’s nailbiting race for Best Movie/Mini Supporting Actress?

Emmy voters love rewarding performers who show their range and versatility by playing multiple roles — just look at Tatiana Maslany‘s victory last year for “Orphan Black. So if Paulson does end up earning a nomination, she could really shake up the race. Also in her favor, Paulson is still riding high after making TV history for “The People v. O.J. Simpson” by winning the Emmy, Golden Globe, SAG, Critics’ Choice and TCA Awards all within the same year.

Regarding her trio of roles on “American Horror Story: Roanoke,” Paulson recently told me, “It was a weird thing from an acting standpoint to start the season knowing that I was an actress playing a part, and then midway through the season I was going to be playing the actress who was playing the part.” She added that it would be a “dream come true” to earn a seventh Emmy nomination. Watch our interview with Sarah Paulson.