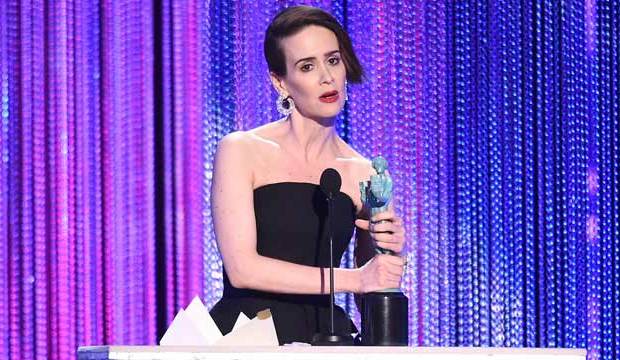 Sarah Paulson won the Screen Actors Guild Award for Best Movie/Limited Actress Sunday night and closed out the best one-year awards run ever for a television performance. She took all five major awards for television acting — Emmy, Golden Globe, SAG, Television Critics Association, Critics’ Choice — for her portrayal of real-life attorney Marcia Clark in FX’s limited series “The People v. O.J. Simpson.” Paulson had two previous Critics’ Choice Awards for “American Horror Story,” but it was her first win at each of the other awards shows.

Her SAG competitors included three actresses whom she had defeated at the Emmys in September (Felicity Huffman for “American Crime,” Audra McDonald for “Lady Day at Emerson’s Bar and Grill,” Kerry Washington for “Confirmation”), as well as Bryce Dallas Howard, who will be eligible at the upcoming Emmys for her work on “Black Mirror.” This was only Paulson’s second SAG nomination and first for television; she was previously included in the Best Film Ensemble nomination for “12 Years a Slave,” losing to the cast of “American Hustle” in 2013.

This awards run has been far from surprising — Paulson was ranked the overwhelming frontrunner in each of her races that were predicted by Gold Derby’s Experts, Editors and Users. She had 1/10 odds tonight and previously enjoyed 1/10 odds for the Globe and 2/11 for the Emmy.

Paulson is the first to sweep the five awards in a single year, but four other performances took multiple seasons to complete this grand slam. The most recent was Best Drama Actor Bryan Cranston, who won an Emmy for his first season of “Breaking Bad,” but had to wait until his sixth and final year eligible to win at the Globes; he won the rest in between. Best Drama Actress Claire Danes won at the Emmys, Globes, TCA and Critics’ Choice for the first season of “Homeland,” but had to wait until the second season for her SAG Award, not having even been nominated for the first. Best Drama Actress Julianna Margulies won the Globe, SAG and TCA Awards straight out of the gate and had to wait until her second season for the Emmy and Critics’ Choice. Best Comedy Actress Tina Fey swept Emmy, Globe, SAG and TCA for the second year of “30 Rock,” but had to wait another three years for Critics’ Choice to begin awarding television; she won the first year that they did.

Four further performances swept the existing big four awards before Critics’ Choice: Best Drama Actor James Gandolfini for “The Sopranos” in 2000, Best Drama Actress Edie Falco for “The Sopranos” in 2003, Best Comedy Actor Alec Baldwin for “30 Rock” in 2007 and Best Movie/Mini Actor Paul Giamatti for “John Adams” in 2008. The Emmys began awarding performances in 1951, with the Globes following for 1961, SAG for 1994 and TCA in 1997.