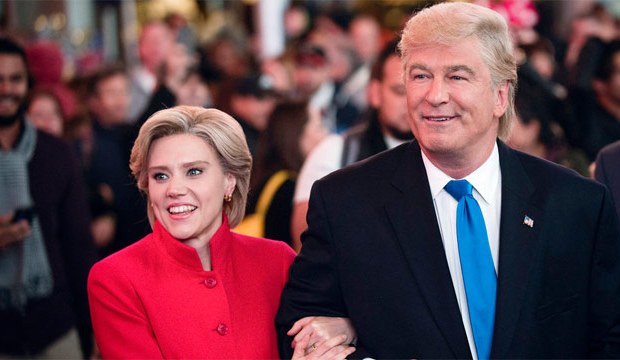 NBC’s variety staple “Saturday Night Live” has gone insanely viral this season, thanks to instantly iconic performances by recurring player Alec Baldwin as President Donald Trump and Emmy champ Kate McKinnon as Secretary of State Hillary Clinton. After popping up in nearly every episode’s cold open as Trump, Baldwin has finally joined the A-list roster of over a dozen other hosts (detailed below) by officially sitting in the driver’s seat. But who’s your favorite host of this season? Familiarize yourself with the “SNL” Season 42 hosts in our photo gallery above, and then have your say by voting in our poll below.

Margot Robbie (October 1, 2016)
Margot Robbie hosted the debut show on October 1 after a star-making turn in the summer movie “Suicide Squad.” Her fact-check monologue was followed by a news report with her as a host woman paired with an unattractive husband, a wild librarian short film, “Celebrity Family Feud” (playing Ivanka Trump), a “Scooby-Doo” parody, and an actress panel (playing Keira Knightley).

Lin-Manuel Miranda (October 8, 2016)
Lin-Manuel Miranda, who is just an Oscar short of an EGOT with wins at the Tonys, Grammys, and Emmys, hosted this season’s second episode on October 8. It was his first time on the long-running NBC show, with his shot largely due to the big success of his Broadway musical “Hamilton.” He was featured in a rapping monologue (“My Shot”), a campfire couple, “Crucible” cast party short film, substitute teacher, “Wells Fargo Wagon” parody of “The Music Man,” a short film called “Diego Calls His Mom,” and a World War II movie.

Emily Blunt (October 15, 2016)
Emily Blunt was the third straight rookie host on October 15 while promoting her new film “The Girl on the Train.” Her “Get Happy” monologue was followed by an escort sketch, a Beyonce music video with the Trumps, film festival parody, Burger King drive-thru window, an indie film with her as “The Sink,” a glitchy robot, “The Great British Bake-Off,” and a bickering group of hamsters.

Tom Hanks (October 22, 2016)
Tom Hanks hosted the fourth episode of the season on October 22, his ninth time guesting on the program. The most viral sketch of the 42nd season so far (other than presidential debates featuring Alec Baldwin as Donald Trump and Kate McKinnon as Hillary Clinton) was his Halloween character of David S. Pumpkins. This episode started with him playing moderator Chris Wallace in the final presidential debate. He was then “America’s Dad” in the monologue, a contestant on “Black Jeopardy,” a neighbor with a new song, the older father in a CBS dramedy parody, Captain Sully, and director Ron Howard hosting “America’s Funniest Pets.”

Benedict Cumberbatch (November 5, 2016)
Benedict Cumberbatch hosted “SNL” for the first time on November 5. This episode opened with a presidential sketch featuring Kate McKinnon as Hillary Clinton and Alec Baldwin as Donald Trump. Cumberbatch then had a singing monologue about himself, the game show “Why Is Benedict Cumberbatch Hot?,” a short film about Koohl Toilet, a surprise bachelorette sketch, “Office Hours,” “Gemma and Ricky” restaurant sketch, Cumberbatch as a criminal mastermind, and a meeting with Mr. Shaw. Special guests included Bill Murray, Dana Carvey (as the Church Lady), and members of the Chicago Cubs (World Series winners).

Dave Chappelle (November 13, 2016)
Dave Chappelle hosted “SNL” for the first time on November 13. His appearances on the episode included his stand-up monologue about the election results, an election viewing party, a parody of “The Walking Dead” with characters from “Chappelle’s Show,” a bad sketch take-off called “Jheri’s Place,” last call in a bar, and a football party.

Join the discussion: Sound off about ‘SNL’ in our notorious forums

John Cena (December 10, 2016)
John Cena became a first-time host in December. His sketches included a tough guy monologue, hosting a game show, film shorts about karate and a police woman duo, football science presentation, playing Rob Gronkowski on a game show, and being a boss at a Christmas party.

Alec Baldwin as Donald Trump (‘SNL’):
How’d he do alongside Kate McKinnon as Hillary Clinton?

Felicity Jones (January 14, 2017)
Felicity Jones hosted the first episode of the 2017 calendar year. She began with a “Star Wars”-related monologue and then had sketches as part of “The Bachelor” (Beard Hunk), movie interview, corporate retreat, theatre donor, “The Princess and the Curse,” and Susan B. Anthony tour.