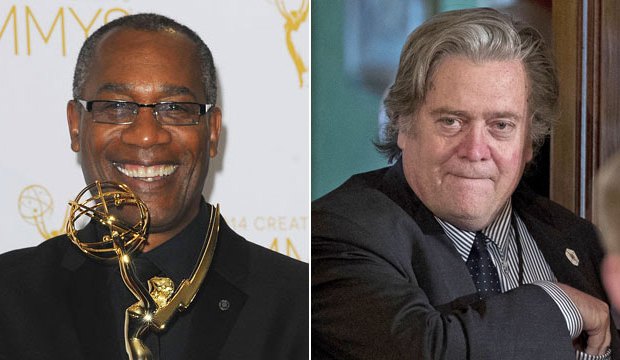 If you’ve fallen behind on ABC’s “Scandal,” new villain Theodore Peus (David Warshofsky) is currently trying to murder his way to the Vice Presidency, with Olivia Pope (Kerry Washington) and her team doing everything they can to stop him. In a new TV Line interview, Joe Morton, who won an Emmy for playing Olivia’s father Eli Pope in 2014, even goes so far as to liken Peus’ manipulative, corrupt character to real-life political operative Steve Bannon, the White House Chief Strategist to President Donald Trump.

“For all intents and purposes, [Peus is] that one thing we wish never happens in our government, which is that someone actually gets into the White House who does not have our best interest at heart,” Morton tells our sister site. “The Theodore Peus character is, I imagine, what Steve Bannon is like in real life. It’s somebody inside the White House whose point of view is not necessarily one that’s out to make it a better country so much as fulfilling an ideal.”

Bannon’s role in the Trump administration has come with its fair share of controversies, among them being that his detractors don’t feel the uber-conservative has the experience to quality for his high-level position. A former film producer and media executive of the alt-right Breitbart News, Bannon has such a bad wrap in the left-leaning media that on NBC’s sketch comedy “Saturday Night Live” he is played by Death.

Joe Morton won the Emmy for Best Drama Guest Actor three years ago for his breakout role of Eli on “Scandal.” After several seasons of guest star appearances, Morton was upgraded to series regular last year where his role has increased in importance. This year Morton will be on the Emmy ballot for Best Drama Supporting Actor for the long-running political thriller.

“Scandal” is nearing the end of its sixth season on ABC, a shortened season of only 16 episodes due to Washington’s real-life pregnancy. The show recently celebrated its mammoth 100th episode on the alphabet network, a fantasy hour revealing what would have happened to our favorite gladiators had Olivia not agreed to steal the White House for President Grant (Tony Goldwyn) eight years ago.