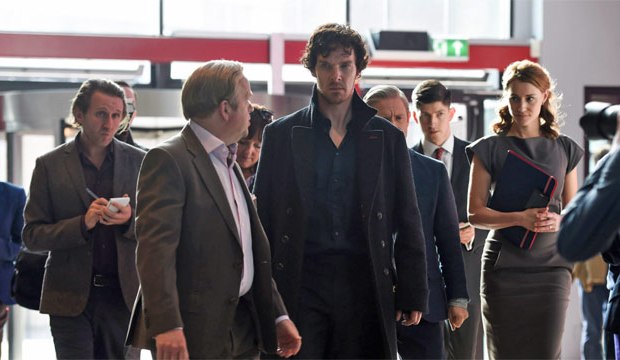 As in years past, PBS’s “Sherlock” series is once again trying its luck in the race for Best TV Movie by submitting only one of its three telefilms for Emmy consideration. Gold Derby has exclusively learned that this year’s submission will be “Sherlock: The Lying Detective,” the second installment that aired January 8 on PBS in America and BBC One in the U.K. By sticking to this savvy strategy, that means the other two “Sherlock” episodes — “The Six Thatchers” (Jan. 1) and “The Final Problem” (Jan. 15) — are thus ineligible for Emmy consideration.

“The Lying Detective” stars 2014 Emmy winners Benedict Cumberbatch as genius detective Sherlock Holmes and Martin Freeman as his loyal sidekick John Watson. The case is a twisty one, as Sherlock is contacted by the daughter of an entrepreneur who she claims has confessed to murder, only she can’t remember the specific details as her father wiped her memory.

The other eligible supporting cast members for the movie/miniseries Emmy races are revealed on the TV academy’s website (see photo below). They are: Toby Jones as Culverton Smith, Mark Gatiss as Mycroft Holmes, Amanda Abbington as Mary Morstan, and Sian Brooke as Elizabeth. The eligible director is Nick Hurran, while co-creator/producer Steven Moffat is the submitted writer.

This savvy Emmy strategy has proven quite successful for PBS in years past, beginning with “A Study In Pink” nabbing four nominations in 2011. The next year “A Scandal in Belgravia” (2012) was the chosen episode and it earned a whopping 13 nominations. In 2014 “His Last Vow” wowed awards watchers when it scored 12 bids and won seven including acting trophies for Cumberbatch and Freeman and Best Writing for Moffat. And last year the program only produced a single telefilm — “The Abominable Bride” (2016) — instead of the normal three; it was nominated six times and finally took home the ultimate prize of Best TV Movie.

How will the strategy pay off for “Sherlock: The Lying Detective” at the 2017 Emmys? Do you think “The Six Thatchers” or “The Final Problem” would have been more Emmy-friendly, or did PBS make the right decision? Be sure to sound off down in the comments section below.