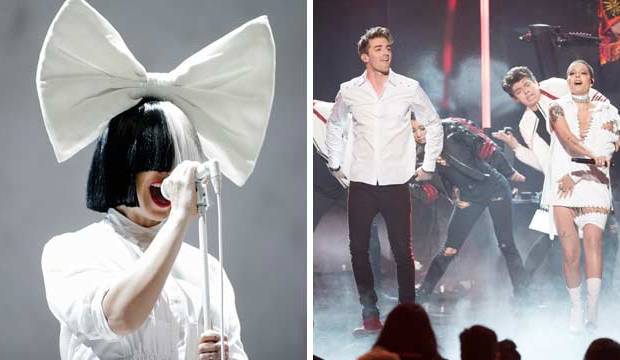 The Grammy for Best Pop Duo/Group Performance has a great track record. In its last five years it has honored the Record of the Year champion three times. This year does not stray from that path, as all five nominees ranked among Billboard’s top 20 hits of 2016 (the lowest of them at number-12). Competition is fierce but only one can get the gold.

WHY THEY’LL WIN: In a category full of hits, “Closer” might be the biggest one
Technically, it is the biggest. This collaboration spent 12 weeks at number-one on the Billboard Hot 100 singles chart. It debuted in the top 10 in August and is still lodged in the top three half a year later. So not only has it performed incredibly well on the charts, it’s still performing incredibly well, which means it is the nominee that’s freshest in voters’ minds. The Chainsmokers have great momentum, as “Closer” is the third in a string of increasingly popular singles, giving the electronic duo an aura of slow-burn popularity. They are on fire and the Grammy voting period caught them at their hottest.

WHY THEY WON’T WIN: This is the Pop field, not Dance
The songs that usually win this category either showcase stripped back production with personal and emotional lyrics (“Say Something” by A Great Big World and Christina Aguilera, “Somebody That I Used To Know” by Gotye and Kimbra), or recall the layered instrumentation of the ’70s and ’80s that brings everyone out to the dance floor (“Uptown Funk” by Mark Ronson and Bruno Mars, “Get Lucky” by Daft Punk, Nile Rodgers and Pharrell Williams). The Chainsmokers and Halsey take a decidedly more modern approach with the electronic production of “Closer.” While EDM has been a primary driver of 2010s youth culture, it hasn’t been as successful at the Grammys. Even Daft Punk only broke through in pop and general field categories when they traded their synthesizers for straight-up disco.

WHY THEY’LL WIN: They owe her
Sia went from respected singer-songwriter to pop superstar in 2014, with the rise of her hit single “Chandelier.” Her melancholic ode to drinking and shame scored four Grammy nominations, including Record and Song of the Year. But Grammy night came and went without Sia making a single trip to the podium, despite a show-stopping performance of her nominated single. She’s back this year with “Cheap Thrills,” a track that, against all odds, outdid “Chandelier” by reaching the top of the Billboard Hot 100. Respected across the industry for her unique songwriting, impressive vocals, and uncompromising vision, Sia is giving Grammy voters another chance to recognize her. Better late than never!

WHY THEY WON’T WIN: Looking at this year’s big picture, Sia falls short
As I mentioned earlier, having support in the general field is a huge advantage when competing in the genre categories. This year, Sia is the only nominee without any general field recognition – “Work,” “Stressed Out,” and “7 Years” are all nominated for Record and/or Song of the Year, while The Chainsmokers scored a Best New Artist nomination. Especially considering that Sia has previously scored general field bids, the lack of major support for “Cheap Thrills” may be a sign that the competition is simply too strong this year.

Halsey ('If I Can't Have Love, I Want Power'): Will she get her second number-one album on the Billboard…

How many VMAs will BTS win? Fans may show them lots of 'Luv' at the 2019 MTV Video Music Awards…

'Survivor's' own Samson, Joe Anglim, takes up singer Sia's offer to lose his locks for a good…

Can Imagine Dragons beat The Chainsmokers at the 2018 Billboard Music Awards?