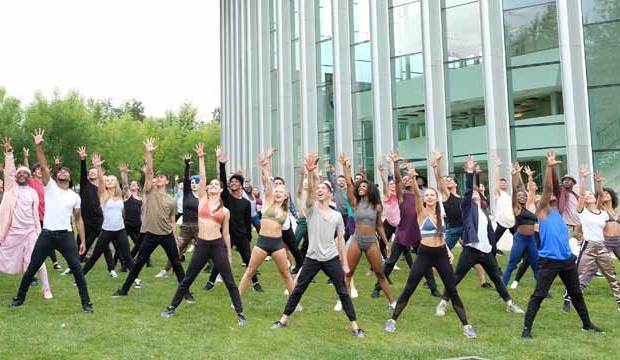 The Emmy-winning “So You Think You Can Dance” launched into the second round of the competition of its 14th season Monday night with dancers entering The Academy. In this round the artists must dance to impress a panel of 10 “SYTYCD” all-stars that will select a team of four dancers each to work with before choosing only one as a partner that they’ll compete and dance with in the Top 10.

Over the last four weeks, series judges Nigel Lythgoe, Mary Murphy and Vanessa Hudgens traveled the country looking for the best dancers in all styles of dance. They invited 100 dancers to join The Academy where over the next three weeks “SYTYCD” choreographers will test them in multiple styles including hip-hop, contemporary, ballroom and jazz as the all stars watch over them looking for their favorites and inviting them to join their team at will.

To kick off the round, the dancers performed a solo in front of the panel of all stars. First up was contemporary dancer Logan Hernandez who impressed some of the all stars so much that they jumped out of their seats mid-performance and concluded with a full-panel standing ovation. Logan set the bar high for his group of ten and was one of nine that advanced from the solos to the hip-hop round, along with ballroom dancer Jensen who lost her partner Tristen to the first cut.

Kevin Davis Jr. and Kyle Bennett both won over the all-stars with their hip-hop solos and Lex Ishimoto wowed once again with his unique contemporary performance. Another risk-taking dancer from the auditions, Ryan Bailey, left the panel in awe during his solo, but failed to earn enough of their votes to advance. In all, 71 dancers made it through the first solos and entered the hip-hop round with Emmy winning choreographers Napoleon and Tabitha D’umo.

After only an hour of learning the steps with Napolean and Tabitha, the dancers paired off and showed their moves to the panel who are now free to begin selecting the four dancers they want to mentor ahead of the Top 10 decisions. At this stage, the panel has to make one of three decisions for each dancer: eliminate them, ask to see more of them by advancing them to the next round of choreo, or selecting them to one of their teams. If more than one all-star asks a dancer to join their team, the dancer gets to choose which team to join.

One of the hot ticket-dancers at this stage was krumper Kevin Davis, picked by five all stars before joining contemporary dancer Allison Holker‘s team. Dassy Lee, a hip hop dancer from Korea, also had a choice between Cyrus Spencer and Fik-Shun and picked the latter. Logan Hernandez had three judges fighting for him, Allison again as well as Robert Roldan and Jenna Johnson, and chose Allison, giving her a second dancer. The other all stars to add a dancer to their team were Jenna, Cyrus, Gaby Diaz, Paul Karmiryan, Comfort Fedoke, Marko Germar and Jasmine Harper.

Who was your favorite dancer of the episode and do you like the new structure of the competition with the all stars? Let us know in the comments!