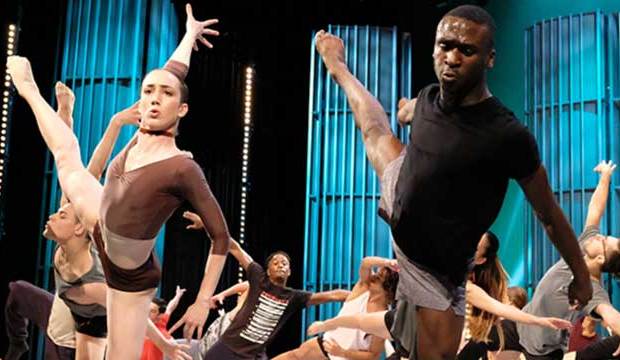 On Monday, “So You Think You Can Dance” continued the second round of the competition of its 14th season with dancers showing off their skills at contemporary and ballroom in classes at The Academy. In this round the artists must dance to impress a panel of 10 “SYTYCD” all-stars that will select a team of four dancers each to work with before choosing only one as a partner that they’ll compete and dance with in the Top 10.

Last week, the all-star coaches had the opportunity to invite their favorite dancers on to their team based off their solo performances and/or the hip hop round. Dancers that weren’t invited to a team move on to this stage of the competition where they continue to fight to impress the panel. Dancers already placed on a team still dance in each round, hoping to not let their coaches down and maintain their position on their team.

On the beginning of this second day of The Academy, Emmy winning choreographer Travis Wall instructed the dancers in a solo contemporary piece. To add individual flavor, Travis left room in the dance for each artist to freestyle their own moves. In the first line-up of performers were contemporary specialists Taylor Sieve and Ariel Disiascio. Hoping to impress all star Robert Roldan, Taylor excelled at the choreo and became Robert’s first team member. Ariel on the other hand was let go from the competition.

After excelling at the solos and hip hop round, flexers Havoc and Klassic each performed unevenly in contemporary. As a result, Havoc was asked to dance for his life in another solo in his own style while his longtime partner Klassic eliminated from the competition straight away. By the end of the contemporary round, Ariel and Klassic joined 12 other dancers failing to advance to the next round. Later, Havoc impressed coach Cyrus Spencer with his solo and was invited to join his team, joining Taylor and seven others that picked for a team in this round.

Once contemporary choreography was complete, the dancers were tasked with a ballroom routine from former SYTYCD contestant Dmitry Chaplin. In ballroom, the skillset the all stars are looking most closely at is their ability to work with a partner. One of the strongest female dancers in this regard was Jensen Arnold, who became Robert’s fourth pick for his team. On the male side, Vasily failed to live up to expectations with his ballroom, but nevertheless was asked by Paul Karmiryan to round out his roster of four. And Jazz dancer Alexis Gilbert had the all star panel whooping and hollering during her ballroom audition, convincing coach Jenna Johnson to add her to her team.

By the end of the contemporary round each coach had a full team of four dancers set, but host Cat Deeley surprised the contestants with dreaded news of the group round where each team of four had the night to prepare a routine to perform the next morning. In this round the all stars would have to eliminate one member from their team. Paul’s team struggled finding common ground with one another during rehearsals and after a confusing performance, Vasily was let go.

On Allison Holker‘s team, hip hopper Kevin Davis, Jr. may have been outmatched by his three contemporary teammates, but the group found room for him to express his own style and their performance left Allison in tears. Referring to it as one of the toughest decisions she’s ever had to make, Allison eliminated Kevin from her team, but Jenna swooped in and asked him to join her team, meaning she’d have to eliminate two of her four dancers in order to make room for him.

In that double elimination situation, Jenna’s group of three male dancers and one female dancer left it all on the stage in a standout routine. Faced with a tough decision of her own making, Jenna said goodbye to Alexis and J.J., leaving her with a team of three male dancers moving forward. With that, 30 dancers remain heading in to next week’s episode where they’ll perform in jazz first and with their all-star coaches second before the final cut of The Academy.

Who was your favorite dancer of the episode and do you like the new structure of the competition with the all stars? Let us know in the comments!