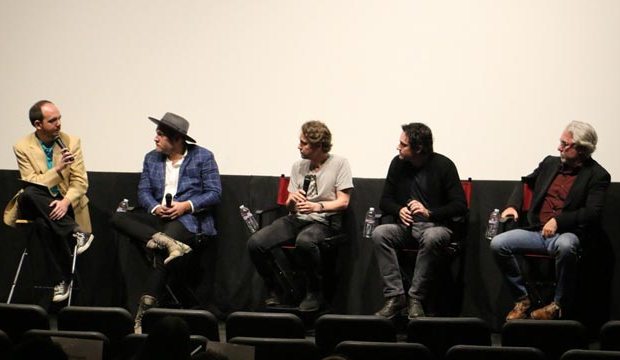 The Society of Composers & Lyricists hosted a panel discussion Wednesday night with composers Dominic Lewis (“The Man in the High Castle”), Alex Wurman (“Patriot”), and Jason Derlatka and Jon Ehrlich (“Goliath”). Gold Derby moderated the event at the Landmark Regent Theater in Westwood that was organized by Amazon and Impact 24 PR.

Lewis worked under legendary composers John Powell, Hans Zimmer, and Henry Jackman before going off on his own to score such films as “Money Monster,” “Rough Night,” and “Fist Fight.” For the second season of this adaptation of Philip K. Dick‘s classic book that imagines a world in which the Nazis won World War II, he divulges, “My pallet had to become much bigger.” He adds, “It was nice for me to let loose because in season one I had to be much more restrained.”

Wurman, an Emmy-winner for “Temple Grandin” in 2010 and nominee for “Bernard and Doris” in 2008, has worked primarily in films, including “Confessions of a Dangerous Mind” (2002), “Anchorman: The Legend of Ron Burgundy” (2004), and “Talladega Nights: The Ballad of Ricky Bobby” (2006). His light touch was appropriate for “Patriot,” a comedic spy thriller centering on a pot-smoking intelligence official (Michael Dorman). “It’s always had a lighter tone,” reveals Wurman of the music. “The whole show feels like an homage,” to spy thrillers of yore.

Derlatka and Ehrlich have collaborated on several projects, reaping Emmy nominations for their work on “The Agency” in 2003 and “House” in 2008 (Ehrlich received a third bid for “Roar” in 1998). In scoring this David E. Kelley and Jonathan Shapiro series about an ambulance-chasing lawyer (Billy Bob Thornton) taking on a case that pits him against the legal firm that expelled him, Ehrlich explains, “I don’t think we’ve looked at it as a legal drama, but rather as a well-told story.” When asked about working together, Derlatka states, “It enables us to take risks.”

Related: SCL hosts panel discussion with composers of “Feud,” “Fargo,” “This Is Us,” and “24: Legacy”

How many Oscars can 'Ma Rainey's Black Bottom' win with no Best Picture nomination?

Anthony Hopkins: How long was each of his Oscar-nominated performances?

Does the Chloe Zhao DGA win make 'Nomadland' unbeatable at the Oscars for Best Picture?