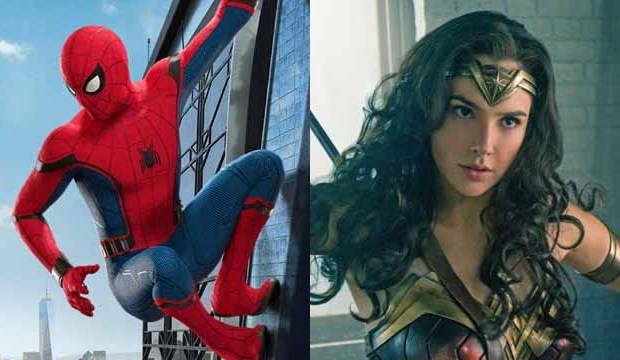 “Spider-Man: Homecoming” made another $45 million at the domestic box office this weekend after open last weekend to a staggering $117 million. However, “Wonder Woman” continued to impress by making almost $7 million in its seventh weekend, which brings its domestic receipts to a staggering $380 million and counting.

We asked you if Tom Holland‘s first solo outing as the webbed crusader would end up doing better than Gal Gadot‘s debut in her own franchise? A whopping 66% of you said that “Wonder Woman” would win the battle of the box office. If you haven’t yet, be sure to vote in our poll at the bottom of this post and sound off in the comments section.

“Wonder Woman,” which is the fourth film in the DC Extended Universe, made $103 million in its first weekend at the beginning of June. Since then, it has continued to do well against such varied fare as “Despicable Me 3” and “Baby Driver.” Indeed, on a daily basis it is outpacing another Marvel movie, “Guardians of the Galaxy: Volume 2,” which opened in early May to $146 million and will top out its domestic run at just under $400 million.

“Spider-Man: Homecoming”  is the 16th entry in the mega-successful Marvel Cinematic Universe. It was produced by Marvel Studios which reached a deal with Sony to share the rights to Spider-Man. Sony had previously produced three “Spider-Man” films starring Tobey Maguire (2002-2007) and two with Andrew Garfield (2012-2014) that weren’t connected to the MCU.

The final film for Maguire, “Spider-Man 3,” holds the weekend box office record among those five as its opening frame takings topped $150 million domestically. It went on to gross $335 million at home. And his first stint as Peter Parker made a record $403 million.