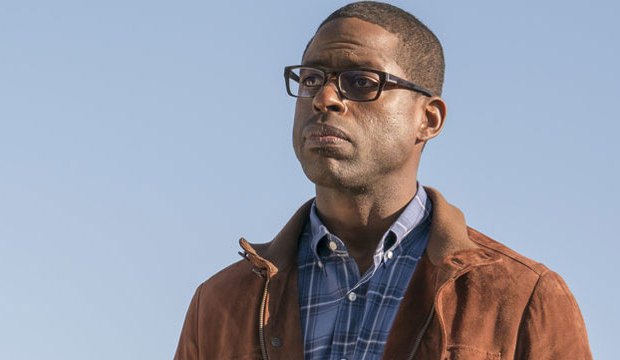 Brown continued his breakthrough year with his co-starring role in NBC’s surprise hit family drama “This is Us” playing Randall Pearson, who was adopted by Rebecca (Mandy Moore) and Jack (Milo Ventimiglia) as an infant, and now Brown deserves another Emmy nomination for playing our new favorite TV brother and son in the February 21 episode, “Memphis.”

Randall began the season by tracking down his biological father William (Ron Cephas Jones), who was dying of cancer. Last week’s episode, “Jack Pearson’s Son,” ended with Randall having a panic attack as the pressure of dealing with his father’s illness and the stresses of his job came to a boil. This week in “Memphis” Randall took a dying William back to his former home. They made stops at the tree where some of Jack’s ashes were scattered and then at William’s childhood house so he could reclaim old mementos.

Later William visits his cousin and they argue about past grievances, and Brown is given an opportunity to show off his comedic skills as he keeps interrupting to learn more about his biological family, and then he even drunk-dials his wife, all the stress and anxiety from last week now gone. But the next morning, after William takes a turn for the worse, Randall argues with the doctor until it becomes clear to him that this is the end. As William delivers a heartbreaking deathbed monologue, Brown does not try to steal attention but instead exercises control, remaining still until he finally breaks down in tears, which is all the more meaningful and realistic for a character who demands perfection from himself. And for Brown it was simply perfect.

Critics have been singing Brown’s praises all season. Jeff Jensen (Entertainment Weekly) pointed out, “Brown navigates his scenes with such intelligence, authenticity, and charisma.” And Mary McNamara (LA Times) wrote, “Brown’s Randall is a marvelous study in barely balanced forces.” And critics are just as effusive about his performance in “Memphis,” which was described by Kimberly Roots (TVLine) as “subtle, powerful work … Beautiful.” And Maggie Fremont (Vulture) adds, “It’s a gorgeous episode … and it really soars thanks to moving performances from Ron Cephas Jones and Sterling K. Brown.”

Let’s examine the pros and cons of Brown’s chances of getting another Emmy nomination:

The Emmys love a new discovery, and they put Brown on the map with his win last year. Just like Margo Martindale, who won her first Emmy in 2011 for “Justified” and then won two more for “The Americans” (2015-2016), voters may wish to keep on honoring Brown.

Brown scored two SAG Award nominations for “This Is Us” and “People v. O.J.” That proves that his acting peers are well aware of and appreciate his work. He was the only performer that received recognition at SAG from the large ensemble cast of “This is Us.”

Dish ‘This is Us’ with Hollywood insiders in our notorious forums

It has become increasingly difficult for performers from the big four broadcast networks to compete with cable and streaming shows in the drama races. Of the 24 performers nominated in the drama acting categories at last year’s Emmys only two were from network shows: Viola Davis (ABC’s “How to Get Away with Murder”) and Taraji P. Henson (FOX’s “Empire”), both for Best Drama Actress.

Do you agree that Brown deserves awards kudos for his performance in “Memphis.” Discuss in the comments below, and discuss that and more in our forums.

25 best TV drama families ever, ranked, including 'This Is Us,' 'Yellowstone,' 'Dallas,' 'The Waltons'…

Justin Hartley ('This is Us') reveals why he loves Kevin Pearson: 'He's thoughtful, generous, kind, and…

Ron Cephas Jones ('Clyde's') on playing the enlightened Montrellous: 'It's about choosing light'…

Could Susan Kelechi Watson get double Emmy nominations for the final season of 'This Is Us'?