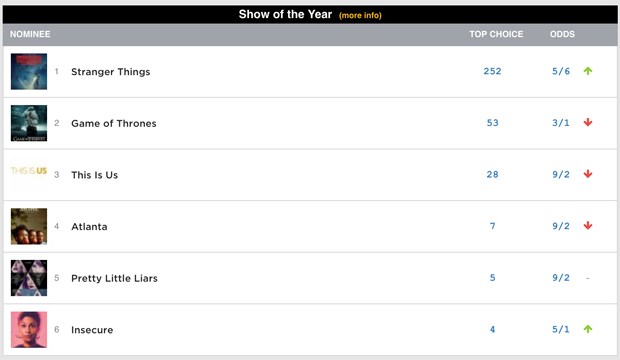 The 2017 MTV Movie Awards for the first time have branched out to include TV series with a new category for Show of the Year, and based on Gold Derby’s predictions “Stranger Things” is far out front to win with leading 5/6 odds. The 1980s-set Netflix drama about the search for a missing boy has four total nominations, more than any other TV program, including bids for Best Actor in a Show (Millie Bobby Brown), Best Villain (Demogorgon) and Best Hero (Brown). The MTV Awards ceremony will take place May 7 at the Shrine Auditorium in Los Angeles, hosted by Adam Devine.

Coming in next with 9/2 odds is NBC’s family drama “This Is Us.” The breakout hit is the only broadcast network show nominated in this category, but it clearly deserves to be here thanks to the quality of the production and the immense buzz it’s received throughout the year. With two other nominations — Best Actor in a Show (Mandy Moore) and Best Tearjerker (Jack and Randall at karate) — “This Is Us” might seem more like a frontrunner if leading man Sterling K. Brown had earned a bid.

MTV Movie & TV Awards: ‘Get Out’ leads with 6 nominations

Two other shows are tied at 9/2 odds apiece: FX’s “Atlanta” and Freeform’s “Pretty Little Liars.” Donald Glover represents his Golden Globe-winning comedy “Atlanta” with a nomination for Best Actor in a Show, while Brian Tyree Henry & Lakeith Stanfield are up for Best Duo. Strangely, “Pretty Little Liars” has no other nominations, indicating weak support overall for the popular teen dramedy.

Rounding out the category in last place is HBO comedy “Insecure” with odds of 5/1. Like “Pretty Little Liars,” “Insecure” has no other nominations to fall back on, not even for series creator Issa Rae, who writes and stars in the freshman series about the life of a contemporary African-American woman. Find out what wins Show of the Year Sunday, May 7 on MTV.

Sterling K. Brown on being 'like a kid in a candy store' after receiving 2 Emmy nominations for 'This is…

Chris Sullivan ('This Is Us'): Emmys 2021 episode submission revealed

Sterling K. Brown ('This Is Us'): Emmys 2021 episode submission revealed

Watch the official announcement of the 2021 Emmy nominations

Will Michael Angarano ('This Is Us') follow in Emmy-winning footsteps of Ron Cephas Jones, Gerald…