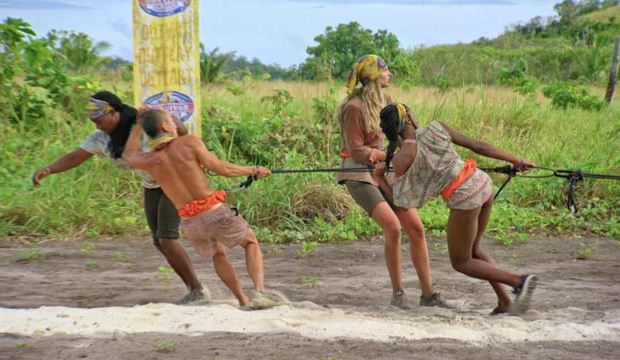 Before J.T. Thomas was voted out in the fifth episode of “Survivor” Season 34, he threw Michaela Bradshaw under the bus by saying that she didn’t deserve the title of “Game Changer.” Ouch! Now that “Survivor: Game Changers” is down to the Final 9, which castaway do you think does NOT deserve that prestigious title? Be sure to vote in our poll below and then update your “Survivor” predictions in our weekly event.

J.T. was bitter because he thought Michaela was going home instead of him, which might be why he called her unworthy of the “Game Changer” title. “My experience with Michaela — which everyone else seemed to share this experience — is that she just had a chip on her shoulder from day one,” J.T. told Gold Derby in his exit interview. “She was very lazy around camp, things like that, so it was very hard to deal with her overall. She was far from a pleasure to be with.”

As of Wednesday’s 11th episode, Michaela finds herself in the dominant five-person alliance along with Andrea Boehlke, Cirie Fields, Aubry Bracco and Sarah Lacina. The other foursome is composed of Brad Culpepper, Sierra Thomas, Troyzan Robertson (who has a hidden immunity idol) and Tai Trang (who has two idols). Of this Final 9, Cirie has played four times, Andrea is on her third season, and the other seven contestants are all competing for their second times.

It’s hard to say, at this point, that any of the nine remaining players don’t deserve to be there. After all, they’ve outwitted, outplayed and outlasted the other 11 legendary castaways — including J.T. But if you could name one of the Final 9 that’s done less game-changing things than the other eight, who would it be? Vote down in the poll below and then join the live “Survivor” debate going on right now in our world famous forums.