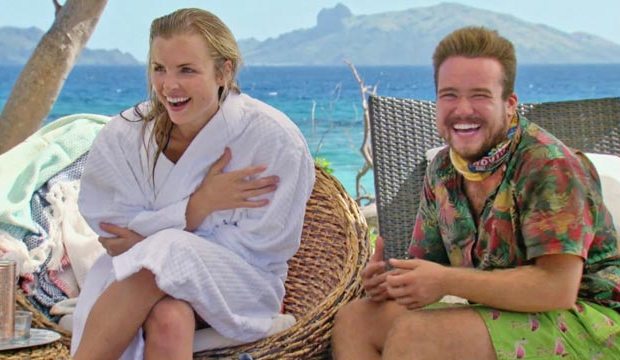 Wednesday’s episode of “Survivor: Game Changers,” titled “Reinventing How This Game Is Played,” should have centered on the battle between two competing alliances. However, the ever-growing rivalry between Andrea Boehlke and Zeke Smith, both members of the dominant group of six, resulted in a true “Survivor” blindside. To see how it all played out, read our Season 34, Episode 11 recap below and then update your “Survivor” predictions in our weekly event.

After last week’s shocking tribal council in which Sarah Lacina flipped on her group, she admitted back at camp that she was the reason Debbie Wanner was ousted, much to the surprise of leaders Brad Culpepper and Sierra Thomas. At the reward challenge, the winning five castaways were Brad, Zeke, Andrea, Sarah and Aubry Bracco thanks to frenemies Andrea and Zeke discovering the answer to the word puzzle was “Reinventing How This Game Is Played.”

While they were enjoying their reward of food and overnight beds, Andrea noticed that Zeke and Brad were bonding a bit too much. She was right. The next day Zeke went to Brad and Troyzan Robertson and said he wanted to create a Final 5 with them, something the two men were happy to agree to since they were at the bottom of the numbers. Back at camp, Cirie Fields told Sarah that Andrea wanted to eliminate Zeke for trying to take her out two weeks ago, but Sarah was hesitant.

At the immunity challenge, Andrea won her second individual necklace by being the first to knock over her dominos. With the confidence of the win, Andrea and Cirie again talked to Sarah and told her that they wanted to eliminate Zeke before he came after them. Aubry and Michaela Bradshaw were soon brought into the plan, but they were worried if they eliminated an alliance member this early, someone could flip next week and they would then be on the bottom.

Tribal council was seemingly going according to plan, with Zeke noting it was too early to make a big play and Brad’s group of four thinking one of them would be sent home. Despite Tai Trang having two idols and Troyzan having one, neither man played his idol. When host Jeff Probst read the votes, it was three against Tai and two against Sierra. Again, all according to plan. But then the next five votes were all for Zeke, enough to send him home.

Truly shocked, Zeke’s parting words were, “I will forever be a better person because I played ‘Survivor.'” And “Survivor” is a better game for having invited Zeke to play.