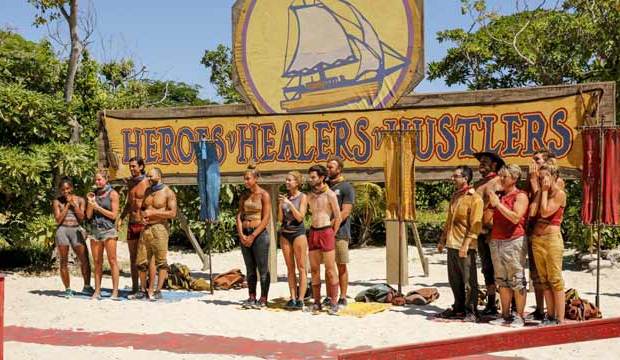 For the second week in a row Joe Mena is our odds leader to be the next eliminated from “Survivor.” In last week’s episode his Levu tribe won safety at the immunity challenge, sending the Soko tribe on their way to voting out Roark Luskin, the first Healer to leave the game. Can Joe’s tribe save themselves from tribal council again this week or is the probation officer from the Bronx headed off the island?

Below, check out our minute-by-minute “Survivor” recap of Season 35, Episode 6, titled “This Is Why You Play Survivor” to find out. Then be sure to sound off in the comments section about your favorite castaways and who you think can go the distance to win the $1 million cash prize and title of “sole survivor.” Keep refreshing/reloading this page as we’ll be updating live.

7:59 p.m. – I’m still reeling from Ryan Ulrich breaking trust with Ali Elliott at last week’s tribal council. Why did he choose to vote with the former Heroes instead of stay Hustler loyal and will it have a negative impact on his game going forward? I think it should!

8:01 p.m. – At Soko after tribal council, Ali and Ryan delve into their split in the voting immediately much to the enjoyment of Chrissy Hofbeck who was saved because of Ryan’s decision. Ali felt like Ryan was her closest ally in the game, but now feels like she can’t fully trust him going forward. Ryan, on the other hand, was hoping that he’d be able to work with Ali after the vote, but now he thinks she was out of line in calling him out and he feels prepared to vote her out next if he needs to.

8:03 p.m. – At Yawa, Mike Zahalsky assumes the position of provider, catching fish for the tribe and feeling good about it as a personal achievement. During food preparation, Ben Driebergen notices that Mike shares with the tribe whereas Cole Medders does not, and for Ben that’s a huge sign as to who will be a loyal team player as an alliance member. Lauren Rimmer also notices Cole’s selfishness, prompting her and Ben to point it out to Mike and highlight how close Cole is with Jessica Johnston. This all sets the stage for a possible mutiny on Mike’s part to vote with Lauren and Ben against Cole. Interesting!

8:10 p.m. – For the reward challenge the tribes compete for a pizza lunch with soft drinks. To win, two members have to balance a ball together using sticks while traversing a balance beam and then the entire tribe will row a boat where they’ll have to shoot balls from a slingshot to knock down three targets. With one extra member, Yawa chooses to sit out Mike. Ashley Nolan and Desi Williams are the first to drop their ball on the beam, but Ali and JP Hilsabeck get through it on their first try.

8:13 p.m. – Ben takes the slingshot for Yawa and JP shoots for Soko. The Levu tribe reaches the slingshot before either of the other two tribes knock a target over, evening the playing field for Joe on the slingshot. JP is the first to hit a target, followed right by Ben.

8:15 p.m. – Before Levu can get a target down, JP hits the second target for Soko, winning first place. Ben knocks Yawa’s second target down next, earning one pizza for his tribe as the second place finishers. As Soko heads back, JP gets a confessional to the camera saying that he didn’t want to stand out as too strong in challenges, but feels safe on his tribe because they’d have no strength without him. That’s a curious bit of editing considering the timing and leads me to believe we might be headed toward a JP blindside tonight? Wowza.

8:20 p.m. – Conversation during the pizza feast at Soko turns to JP’s strength in the challenge. In asides to the camera, Ryan narrates the personality differences between him and JP, focusing on how clueless JP is when it comes to strategizing. Ryan starts to consider whether it would benefit his game to get rid of JP, a physical threat, now while he has the chance.

8:22 p.m. – The Levu tribe of four seems to be evenly split, leaving Ashley and Devon Pinto in a position where they need Desi to flip on Joe if they’re going to avoid a tie and “going to rocks.” Ashley’s pitch to Desi is that Joe is sneaky, going as far as to ask her if she’d vote Joe out. Desi immediately replies “yes” and I’m buying it. She knows that she can trust him as far as it benefits himself, but she doesn’t feel like he would stick his own neck out for hers if it came down to it.

8:25 p.m. – Meanwhile, Joe is back to searching for the hidden immunity idol that has yet to be found at Levu. According to him, after four days, he found the clue to the idol on the trunk of a tree. Later that night, while the other three are sleeping Joe goes searching for the idol. After some digging at the base of a tree he finds it! Wow. That’s his second idol of the game and this one he plans on keeping secret from everyone else. This is a huge boost to Joe’s game. And our odds had him most likely to go home? Wrong!

8:30 p.m. – Back at Yawa, after standing up from the shelter Cole fainted, apparently from heat exhaustion and a lack of food. It’s not a serious fall and he’s not hurt, but Jessica is concerned that he’s depleted and the shock of the situation makes her realize that she does care about him and wants to stick with him. Mike on the hand sees Cole as a liability and decides that the longer they keep him around the bigger of a problem his health will be.

8:33 p.m. – At the immunity challenge, the tribes will work together to balance a tower of blocks on a disc held up by a rope that each of the four of them is holding. The first two tribes to build a tower that spells “immunity” will earn safety. Because Mike sat out in the last challenge, Yawa chooses Lauren to sit out.

8:36 p.m. – Ryan struggles the most for Soko, causing them to drop their tower at three blocks as Levu and Yawa both get their sixth blocks set. Desi tips as she’s putting a block on, followed by another drop for Soko, leaving Yawa in a position with only one more block to add in order to win.

8:38 p.m. – Cole was the last to set a block for Yawa, but as he was moving back to his starting position to secure the win, he tipped the disc and the whole tower fell. That opens the door for Soko and Levu to both get to a place where they only need one block. Yawa develops a new strategy and they quickly catch up as the other tribes move slowly to finish. Somehow, Jessica gets back to her starting position after placing the seventh block and wins in a shocking comeback. Just after, Devon closes it out for Levu, leaving Soko as the losers set to head back to tribal council for the second time in a row.

8:44 p.m. – After their loss, JP seems to think that Ali knows she’s next on the chopping block after Ryan, Chrissy and JP all voted together last time. What JP doesn’t know is that Ryan sees JP as a threat already and wants to get rid of him. To do that he apologizes to Ali because he knows that he needs her if he’s going to get rid of JP. He assures Ali that he has her back and they agree that they need to get rid of JP.

8:46 p.m. – With Ryan’s approval, Ali goes to Chrissy in order to build a bond between the two of them so that they can work together going forward. Ali promises Chrissy that she’s loyal and that if they’re going to make it through the merge that getting rid of JP is the best move. Ali says at merge she has both Lauren and Devon 100% and they can all build an alliance together to have control. Chrissy returns to Ryan and tells him that they have the choice between JP and Ali, leaving us to guess which one they’ll choose.

8:48 p.m. – At tribal, Jeff Probst asks what happened after their last tribal and Ryan finally explains that Roark was dangerous because of her ties with the other Healers who could have come back together and dominated the game at the merge. That opens up discussion about a presumed merge, putting JP’s neck on the chopping block since he is the typical “merge threat” that we’ve seen in past seasons.

8:52 p.m. – Heading into votes, JP votes for Ali and Ali returns the favor with a vote JP’s way. With Ryan and Chrissy in the driver’s seat, Jeff reads the votes: Ali. JP. Ali. Ali. Whoa. They chose JP! I’m shocked. Ali was such a great player, but I guess Ryan and Chrissy were better? And as he sends them back to camp, Jeff reminds them that they’re counting on a merge, but that might not actually be the case.

8:58 p.m. – In the preview for next week’s episode, we get confirmation that the tribes are merged and everyone seems to be scrambling to get back together with old allies and take control of the game.