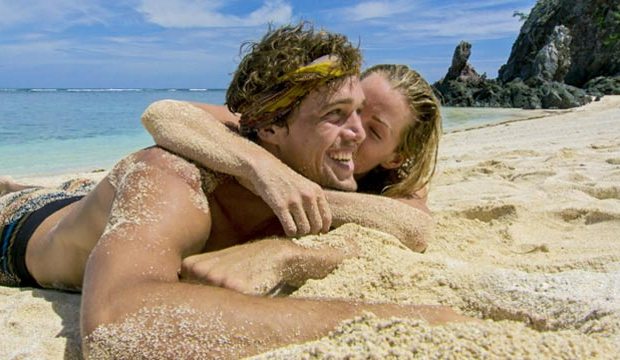 Three tribes became one on Wednesday’s episode of “Survivor” when the 12 castaways still left in the competition reached the all-important “merge.” At this point the players stop competing in teams and instead fight for reward and immunity wins as individuals, typically building and breaking alliances in the final stretch to claim the title of “sole survivor.” Heading in to the episode, Hustler Ryan Ulrich led our combined odds as the most likely season winner, followed closely by Heroes Chrissy Hofbeck and Ben Driebergen. Ryan has been the season’s most strategic player so far while Chrissy and Ben have both enjoyed the benefits of positive “winner edits” from the show’s producers. Did these three manage to stay in power after the restructuring of the game at the merge?

Below, check out our minute-by-minute “Survivor” recap of Season 35, Episode 7, titled “Get to Gettin'” to find out. Then be sure to sound off in the comments section about your favorite castaways and who you think can go the distance to win the $1 million cash prize.

7:59 p.m. – I’ve already professed at length how risky it was for Ryan to break his allegiance to the former Hustler tribe by siding with the Heroes and voting out Ali Elliott. Tonight the merge will give us the answers I seek — will Lauren Rimmer and Devon Pinto feel betrayed by Ryan or can their connections with other Heroes Ben and Ashley Nolan bring them all together in a super alliance against the Healers? I can’t wait to find out, but also #JusticeForAli!

8:01 p.m. – Chrissy’s first confessional following Ali’s elimination is to point out that the two Soko guys, Ryan and JP Hilsabeck, are closer with her than they are with each other. That’s an important point she’s making because it’s an example of how well she’s playing the game socially. And it mostly explains why it was important for her to make sure Ryan voted Ali out, who admitted that come a merge she had Lauren and Devon in her pocket–two votes that Chrissy wouldn’t have had on her side later in the game. Chrissy is playing a great long game and I have to give credit where credit is due.

8:02 p.m. – At Yawa, Cole Medders feels like he’s in control and that at the time of the merge he will have his Yawa five tight to bring in Joe Mena and Desi Williams for an alliance of seven. There’s no way Ben is going along with that–he’s already distrusting of Cole and his relationship with Jessica Johnston.

8:03 p.m. – Levu is still evenly divided between two former Healers and Ashley (a Hero) and Devon (a Hustler), and with a lack of energy because of such little food they’re feeling desperate for a reward win. Later, at what the three tribes think is the reward challenge, Jeff Probst asks them all to drop their buffs because they’re merged! But not before Ben gets the coveted honor of uttering the episode title phrase, “Let’s get to gettin’.”

8:09 p.m. – Joe’s pretty happy about news of the merge because he feels like the Healers hold a majority over the former Hustlers and Heroes and on top of that he has a hidden immunity idol that no one knows about. Maybe it’s the skeptic in me, but that sounds like the Healers are going to get blindsided tonight, LOL!

8:12 p.m. – At the Outback-sponsored merge feast, Cole and Joe came off as loud and confident, personality traits that rubbed Chrissy the wrong way. Joe’s confidence was so high that he opened up about having used an idol already and that clued Chrissy in to the idea that he may have found another while at the Levu camp. Meanwhile, Jessica is setting her sights on staying Yawa strong and following up on Cole’s plan to bring in Desi and Joe, but Chrissy is already re-connecting with Ben and voicing her suspicions to him that Joe may have found a second idol.

8:15 p.m. – Back at camp, Jessica brings Desi in for a conversation and confirms with her that she and Joe are prepared to stay Healers strong. Then Ryan brings Devon in to re-confirm their previous alliance and Devon agrees with him that a Hustlers-Heroes alliance makes the most sense for them right now. No sign that Devon is upset at Ryan for voting out Ali. No justice for Ali!

8:21 p.m. – Devon approaches Lauren with his and Ryan’s plan to join with the Heroes to take out all of the Healers, but Lauren feels stronger with the Healers so she relays that information to Mike Zahalsky right away. Later, having not worked with either yet, Devon has a conversation with Chrissy and Ben about his plan to stick with the Heroes and target either Cole or Joe for the next vote. That puts Ben squarely in the middle of two large alliances and for him the crux of the decision is whether or not he can trust Cole.

8:23 p.m. – Ben pulls Mike in for a conversation about how big of a threat Cole is, but Mike stresses to Ben that they have to stay Yawa strong and that they can get rid of Cole later once they have secured their alliance the power. Sorry to say, but Mike is right here. If Ben knows that Lauren is sticking with the Healers and that he would be safely in the numbers there then targeting Cole now isn’t necessary.

8:29 p.m. – For the immunity challenge the 12 castaways had to balance on a narrow beam while holding a large wooden ring spinning a ball inside of it. The last person still balancing with the ball inside their ring would win and save themselves from elimination at tribal council. Seconds in to the challenge, Ryan dropped his ball and was out.

8:31 p.m. – Mike is out next, followed by Jessica, Ben, JP, Devon and Lauren. At this point the five left have one foot on the thinnest part of the beam and then Joe drops, leaving Desi, Cole, Chrissy and Ashley fighting for immunity. After only 10 minutes of the challenge, Cole drops his ball and then Chrissy does, too. Ashley and Desi are still holding on 30 minutes in to the challenge. At 40 minutes Jeff asks them both to put both feet on the most narrow part of the beam and that quickly causes trouble for Ashley, meaning Desi wins!

8:42 p.m. – After the challenge Cole feels like the pressure on him to save himself and takes the opportunity to apologize to Ben about his irresponsibility with the food consumption. Ben plays it off and accepts the apology to Cole’s face, but he knows that it still speaks volumes about Cole’s selfishness.

8:43 p.m. – Joe also feels like there’s a target on his back and in a conversation with Cole he scolds Cole about bringing Ben into the fold of their alliance because he doesn’t believe he can be trusted and fully expects Ben to flip on them. Regardless, the Healers alliance (plus Lauren) feel like Chrissy is the most dangerous player on the other side of the game, but they know that they need Ben in order to have a majority.

8:46 p.m. – In a private conversation between Lauren and Ben, they argue about whether or not it’s in their best interest to vote with Cole or to vote him out. Lauren wants to stick with the Healers for now while Ben wants to join the Heroes-Hustlers alliance. That alliance has a conversation, including Lauren and Ben, about who is their best option to vote out taking into consideration that Joe might use an idol on himself or Cole. At that point they throw Jessica’s name out as a possible “safe” vote.

8:48 p.m. – At tribal, Jeff brings up the topic of what makes someone a threat at this point in the game and Lauren, love her to death, says that not only are there physical and strategic threats but also there are people that just plain annoy them. And true to form, Joe brings his cocky attitude again, first stating plainly that he’s both a physical and strategic threat, but more than that the has…. yep… another idol. He literally pulled it out and threatened the rest of the group that he may use it tonight! This guy is crazy.

8:59 p.m. – Next week, the Healers feel like their fate is sealed but then dreams of finding another idol consume Chrissy and Cole who are seen wrestling in a sand pit apparently digging to find one before the other does. Chaos? I’m into it! See you here next week.