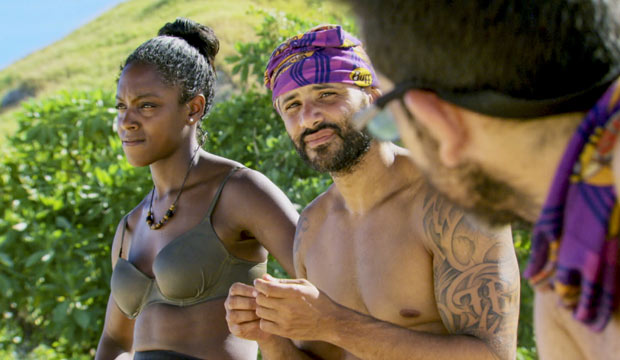 After playing both sides on last week’s “Survivor,” Ben Driebergen and Lauren Rimmer decided to vote with what we’re calling the Heroes-Hustlers super alliance against a former Healers tribe that is now left with very few options. At the head of the flailing Healers alliance is Joe Mena and Cole Medders, the two players our odds say are most likely to be eliminated next. Tonight, with their heads on the chopping block, we will see if Ben and Lauren double-down on their alliance with frontrunners to win Ryan Ulrich and Chrissy Hofbeck or if they backtrack and offer the Healers a way out of certain doom.

Below, check out our minute-by-minute “Survivor” recap of Season 35, Episode 8, titled “Playing with the Devil” to find out how it all unfolds. Then be sure to sound off in the comments section about your favorite castaways and who you think can go the distance to win the $1 million cash prize. Keep refreshing/reloading this page as we’ll be updating live.

SEE‘Survivor’ 35: Joe Mena annoys you the most, but who comes in second place? [POLL RESULTS]

7:59 p.m. – At this point we’ve got to assume that Joe and Cole are the biggest targets for the Heroes-Hustlers super alliance to go after, right? Joe is without an idol and Cole lost his partner in crime — is there anything either of them can do (except win immunity!) to change their fate in the game?

8:01 p.m. – It’s nice to see Joe congratulating Ben on making a smart move by blindsiding Jessica and getting Joe to use his idol in the process. And sounds like Ben is dead set on sticking with the Heroes-Hustlers alliance until the final seven. Interesting.

8:02 p.m. – Lauren finds the clue that was wrapped up with the nails from the merge feast! It’s an advantage in the game–she can secretly hold her vote from he next tribal council and instead place that unused vote at a future tribal council for a second vote! Wow, that’s kind of sneaky. And I’m really happy Lauren got it.

8:06 p.m. – Time for the reward challenge where it looks like they’ll be divided into two teams. The challenge is an obstacle course in the first stage and a slingshot to knock down five targets in the second stage. The prize is a spaghetti and wine feast! With an odd number of players, teams are selected at random with the 11th person sitting out the challenge, but getting to enjoy the feast with the winners. One team in red is Ben, Lauren, Desi, Ashley and Mike; the other is Ryan, JP, Chrissy, Devon and Cole in blue.

8:09 p.m. – Ben stays up shooting bags until he hits red’s first target. Ryan goes up first for blue, shoots one and misses then exits to let Chrissy come and shoot. Mike comes up next for red and hits a target, bringing Ashley up after. As JP and Devon start alternating turns, they catch up and match red 3 for 3 while Ashley struggles. By the time Ashley gets red’s fourth target, JP is on deck for blue and hits their fifth, winning reward.

8:11 p.m. – As a twist to the feast, Jeff lets the winners know that it’s a family style meal with only one seat at the table, meaning each player will get to eat until they’re full, leaving the rest for the remaining players to feast on. The catch is that they can eat most or all of the food themselves or save enough to spread the wealth among the others. As the player that sat out the challenge, Joe is in charge of choosing the order that they’ll eat in, which he sees as an opportunity to win over some people in order to earn him some safety at the next tribal council. This is an evil reward, but I’m so into it. I hope Joe is really shady about it!

8:16 p.m. – Joe’s order for eating puts Devon Pinto first because it’s his birthday (aww!), but also because he thinks that after their time at Levu together that Devon can help sway the others to keep Joe around a little longer. JP Hilsabeck is next and after Devon set the precedent of eating a fair share, he plays it safe as well, but not before we get a glimpse of what looks like a hidden clue at the bottom of a plate. And sure enough, with Cole up next, he notices the letters and and reads the clue. To hide the clue from everyone else he moves the pasta on top of the napkin and hides the plate. LOL!

8:19 p.m. – But Chrissy, sharp as ever knows that there must be a clue somewhere so she searches all over the table for the clue. Then, next is Ryan who does the same exact thing, finds the clue as well. But playing it even smarter, he takes the plate with the clue and buries it in the dirt so that Joe, who chose himself to eat last, won’t see it.

8:21 p.m. – So the clue clearly said that the hidden idol is buried underneath the tribe flag back at camp and Cole, Chrissy and Ryan all knew about it. As soon as they get back to camp, Cole leaves to go to the bathroom which gives Ryan an opening to go dig for the idol. While he’s away, Ryan finds the idol and then walks away, asking Chrissy to cover up the hole he left in the sand. Amazingly, Cole comes back to see Chrissy in the sand and runs over to her to fight her for the idol. The commotion brings the entire tribe over to the spot and while they’re all digging Ben accuses Cole of finding it and tucking it into his shirt. And though Cole didn’t find it he’s now got an even bigger target on his back because they all think he did. Crazy.

8:27 p.m. – At this point, Cole feels like he needs to win immunity in order to remain in the game. The challenge he’ll have to win this week is based on endurance and concentration–each player will stand on a narrow beam while balancing a statue with a long pole. At different stages in the challenge they’ll have to step further away from the statue, making it harder to balance at the end of the pole.

8:31 p.m. – A couple seconds into the section stage, Ashley Nolan drops and Ben starts to wobble, but recovers. After some slight movement from both JP and Cole, Chrissy falls and then Ben right after her. That leaves Desi Williams, Cole and JP as the final three.

8:33 p.m. – And then out of nowhere Desi falls! With two left, the eliminated players watch on and quietly cheer on JP to beat Cole. Both guys start to wobble and just like that JP falls, making Cole the winner! In true “Survivor” fashion, he wins immunity at the exact time he needs it most. That’s going to spell doom for someone that otherwise would stayed in the game for another three days. Too bad.

8:40 p.m. – With their number one target winning immunity, the Heroes-Hustlers alliance will have to scramble to decide which other Healer they’re going to target. The plan is to split the vote between Joe and Desi in case they pull out another hidden idol to save someone. Desi’s name is on the chopping block because she’s proven herself as strong at challenges.

8:41 p.m. – Not wanting to lay down and let the Healers get picked off, Cole goes to Joe and Mike and confesses to them that he doesn’t have an idol. But because they all think the other side thinks Cole does have an idol, they anticipate that they’ll split the vote. With that in mind, Joe goes to Devon and Ryan and pitches Ben as a huge threat to win the game if he’s allowed anywhere near the finals. But Ben was hiding in the bushes and hold the entire conversation, confirming his suspicion that Joe needs to be the one to leave. The big takeaway from this scene though is that Ryan admits that Joe is right–Ben is a threat and can’t make it to the finals, but he knows he can’t vote him out yet because it’ll be a betrayal of Chrissy’s trust, which he needs to maintain for now.

8:44 p.m. – Later, Lauren tells Ben about her secret advantage because it basically prevents them from splitting the votes due to her having to not vote. Wanting to keep Lauren’s power for a future tribal council, Ben decides that they need to pull a Healer over to vote with them in order to secure Joe’s elimination. He approaches Mike who is immediately clued in to the fishiness of Ben suddenly needing his vote at the tribal council. That places Mike in the position of getting to decide whether he earns some trust by voting with the dominant Heroes-Hustlers alliance or seizing the opportunity to make a huge move and take out Ben.

8:48 p.m. – At tribal council, true to form, Joe immediately goes on the offensive and reiterates that Ben is a huge threat and is making all the decisions in the game. That comment re-ups an argument that the had earlier in the day about Ben’s service in the Marines, but this time Chrissy and Ashley come to Ben’s defense against Joe, basically calling him annoying.

8:52 p.m. – Time for the vote, let’s see if Lauren’s advantage creates any wackiness and which side Mike chooses to align with! Before reading the votes Jeff asks if anyone wants to play an idol and there’s no comment from anyone. The votes: Ben, Lauren, Desi, Joe, Desi, Joe, Desi, Joe, Desi, Joe. That’s only 10 votes and it’s a tie so they’ll re-vote. Why is no one asking why there wasn’t an eleventh vote???

8:55 p.m. – The new votes: Desi, Joe, Desi, Desi, Desi, Desi. What? Why didn’t they vote out Joe? I thought he was their main target! Nevertheless, Desi is gone and she’s officially the first member of the jury. I can’t believe both Joe and Cole somehow made it through this episode. What a blindside!