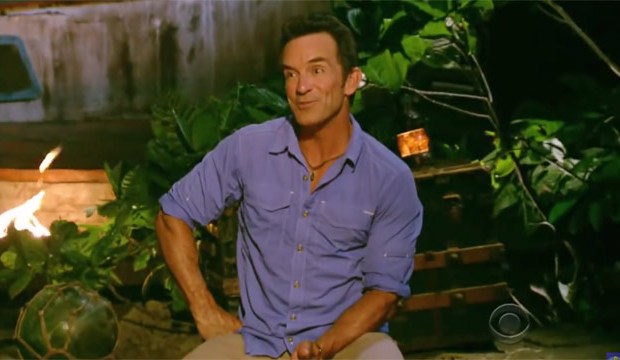 Despite heavy odds that one of them would be voted out of “Survivor” last week, strategic and physical threats Joe Mena and Cole Medders are still among the 10 castaways competing to win a million dollars. Tonight their heads are once again on the chopping block, leading our odds as the most likely to be eliminated next for the second week in a row, but could be spared if the prevailing Heroes-Hustlers alliance decides to target one of their own instead. Can the two Healers make it through another tribal council alive or is their time on the island up?

Below, check out our minute-by-minute “Survivor” recap of Season 35, Episode 9, titled “Fear of the Unknown” to find out how it all unfolds. Then be sure to sound off in the comments section about your favorite castaways and who you think can go the distance to win the $1 million cash prize. Keep refreshing/reloading this page as we’ll be updating live.

SEE‘Survivor’ 35: Joe Mena annoys you the most, but who comes in second place? [POLL RESULTS]

7:59 p.m. – We were completely blindsided last week when Desi Williams was voted out even though there was a clear opportunity to eliminate Joe instead. I love a blindside as much as anyone else, but isn’t it time one of the male players goes home?! It’s been four women in a row! Hopefully they change that up tonight.

8:01 p.m. – Mike Zahalsky was talked into voting Joe out last week, but is disappointed that Desi went home instead. He feels like he still needs to gain trust in the Heroes-Hustlers alliance so he’s throwing Joe and Cole under the bus. He’s playing a really stealthy game!

8:02 p.m. – Still confused how Lauren Rimmer was able to not vote last week and no one else has counted the votes to ask why there was a vote missing. Like Mike, Lauren is being really smart and low-key about her game and keeping Ben Driebergen close is working out well for her.

8:03 p.m. – Another twosome to watch is Ryan Ulrich and Devon Pinto. Ryan confides in Devon that he found a hidden idol and he trusts that Devon won’t spill the beans to anyone else. Ryan also tells him that it’s their secret, insinuating to Devon that they’ll use it to further both of their games, strengthening their alliance.

8:07 p.m. – Time for a reward challenge! Played in two teams, the castaways will dive underwater to retrieve three balls locked in buoys that they’ll later use to shoot (like basketballs) into three hoops. The prize is a day away from the island on a yacht with lunch. Teams are: Ben, Devon, Ashley, Ryan and Lauren vs. Cole, Chrissy, JP, Joe and Mike.

8:09 p.m. – It’s Chrissy and Ben out first for their teams and Chrissy beats him unlock the ball from the first buoy. Second is Cole, with a massive head start, against Ashley, who makes up a lot of ground once she gets the go-ahead. Closing it out at the buoys are JP and Devon, but JP continues the trend of his team outshining the others and gets it done really quick.

8:12 p.m. – When it comes time to shoot for the baskets, Joe makes three in a row right off the bat for the red team, making sure that they don’t lose their lead easily. But then Ben starts shooting and matches the three to tie it up. Joe is the first to make the fourth and only needs one more which he gets immediately, winning for the red team.

8:18 p.m. – On the reward, Chrissy Hofbeck is not with her closest allies but sees an opportunity to control the conversation that her adversaries are able to have. One of her biggest enemies in the game is Joe, who, remaining true to form, makes it clear he’s looking for a clue to another idol. LOL he never stops!

8:20 p.m. – Back at camp, Ryan pulls Ben aside and tells him that he has the idol (Ben thought Cole found it). That puts Ben at ease and now he not only feels like they can get Cole out, but it also lets Ben know that Ryan is playing hard and he’ll need to take him out once they’re down to the final seven.

8:22 p.m. – Joe, knowing that he’s starting to rub everyone the wrong way, develops a new plan to continue to get on people’s nerves so that the alliance of seven will want to keep him around to go against him in the final tribal council. That’s always an interesting strategy because if he gets to the finals he’ll need to earn the votes of the people he is pissing off. His first target is Ashley Nolan, who he calls a “goat,” the name for a player that rides the coattails of stronger players to get far in the game. Joe’s plan could be backfiring though because now Ashley wants to pitch him to go home before Cole just to get rid of the more problematic personality.

8:28 p.m. – In an effort to pull in another number to his alliance with Lauren, Ben goes on a walk with Devon, telling him that his ideal final three would be himself, Lauren and Devon. In order to build trust, Ben tells him the “secret” that Ryan has an idol. Devon plays it cool like he didn’t already know (he did!) and now he’s clued in to the fact that he might not be the closest person to Ryan after all. In a confessional, Devon says that now he’s going to play with Ben instead of Ryan!

8:30 p.m. – For the immunity challenge, the final 10 will squat with two bars resting on their shoulders that if move too high or too low will trigger an urn to fall and eliminate them from the competition. This sounds incredibly tough–squatting is not easy!

8:32 p.m. – The first to drop is Ashley, a player I thought could probably win it! Next to go is Mike, followed by JP and Devon. Right after that, Joe drops and then Ben joins him. That leaves four: Chrissy, Cole, Lauren and Ryan.

8:35 p.m. – 20 minutes into the challenge, the final four all look strong, but then out of nowhere Chrissy drops right before Ryan. The last two: Cole and Lauren! Lauren starts to show movement, stretching her legs as much as she can, but still holds on long enough for Cole to drop his urn. Lauren wins! Wow, what a player. Love her!

8:43 p.m. – With both Cole and Joe available for the vote, the alliance of seven starts discussing which of the two is the best to get out now. Again, they’re prepared to split the votes due to the “fear of the unknown” of an idol. Ben suggests to Ashley that they should split between Cole and Mike because Joe is the likeliest to have an idol. This pisses Ashley off because she really wants Joe out and (rightfully so) thinks he’s the most dangerous of the three. Telling people what to do isn’t a good look for Ben and kind of confirms the allegation Joe made against him last week.

8:45 p.m. – Ashley goes to Chrissy, Ryan and Devon and they all agree that they want Joe out and are prepared to tell him that he doesn’t get to decide this one and Joe is going home. Elsewhere, Ben tells Mike that it’s going to be Cole. Mike starts to worry that he’s running out of time to make a move so he’s going to play his idol for himself, Cole or Joe. For Mike this is “go big or go home” time.

8:47 p.m. – Chrissy goes to Ben to voice the concern about keeping Joe around, arguing that Cole might win some immunity challenges, but he’s never going to win the game (the insinuation being that Joe could). Ben is not in agreement and tries to force his way, pissing Chrissy off in the same way that Ashley was. And with that we head to tribal council with so much hanging in the balance!

8:49 p.m. – At tribal, Mike leans in to Joe and asks him to “follow [his] lead.” Right off the bat, the conversation leads to how Cole, Joe and Mike are all left out of the discussions and one of the three is likely going home. When Chrissy gets the floor to talk she addresses the fight between Joe and Ashley, which gives Mike a spot to put blame on the big seven for making Joe feel like a pariah. Lauren and Chrissy start arguing with Mike, with Lauren basically saying that Mike is digging himself a hole. But the point Mike, and later Joe, is trying to make is that the alliance of seven is refusing to play the game by sticking together.

8:52 p.m. – After voting, when Jeff Probst asks if anyone wants to play a hidden immunity idol Mike steps up to play his for himself! The votes are: Ben, Mike, Mike, Cole, Cole, Cole, Cole, Cole. So Mike’s idol is used on the wrong person and Cole is voted out of the game. Only two Healers are left, but I think we’re getting the beginning of the Heroes-Hustlers alliance fracturing and turning on each other!

8:59 p.m. – Next week it looks like Lauren, worried that the alliance of seven won’t last, starts to make moves! She might pull Joe and Mike in to her side, possibly against Ryan and Chrissy? Can’t wait! See ya next Wednesday.