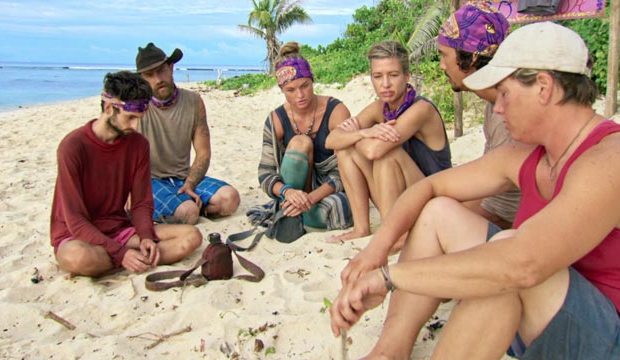 The merge has finally arrived on “Survivor: Heroes v. Healers v. Hustlers,” with Jessica Johnston being the first casualty of the three tribes combining into one. Now that we’re down to the Final 11 castaways of “Survivor” 35, we want to know who annoys you the most after the merge. Let your voice be heard by voting in our poll below and sounding off down in the comments section.

Just last week we ran a poll asking who’s your favorite player and Marine Ben Driebergen was your #1 choice with 23% of the vote. Post-merge Ben seems to be holding a lot of the power, as he is now part of the combined Heroes/Hustlers super alliance of seven people: Ben, JP Hilsabeck, Chrissy Hofbeck, Ashley Nolan, Devon Pinto, Lauren Rimmer and Ryan Ulrich. Comparatively, there are only four remaining Healers following Jessica’s ouster: Cole Medders, Joe Mena, Desi Williams and Mike Zahalsky.

We know who Chrissy would name as the most annoying player in our poll, as she was immediately irritated by Joe’s behavior at the merge feast. “This is the first time that I have a chance to meet Joe,” Chrissy explained. “And my goodness, I am very glad that I’ve spent all this time so far without Joe. He’s really loud and totally obnoxious.”

And if Ben were voting for the most annoying, he’d no doubt choose Cole because of his habit of hoarding food. After Cole tried to apologize to Ben, Ben didn’t seem too accepting of his reasoning. “Cole came up and apologized to me and I did my little, ‘Oh no bud, we’re good,'” Ben remarked. “He’s offended me this whole time I’ve been at camp.”