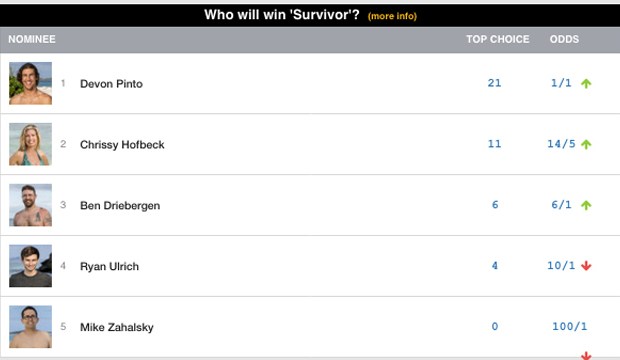 This week on CBS’s “Survivor,” Ashley Nolan was eliminated in sixth place on “Heroes v. Healers v. Hustlers,” leaving only five players still in the hunt for the $1 million prize. (Listen to our exit interview with Ashley.) According to exclusive Gold Derby predictions, Devon Pinto has the best chance of joining the list of “Survivor” winners. This 23-year-old surf instructor from Solana Beach, CA has leading 1/1 odds to prevail, ahead of second-place contender Chrissy Hofbeck with 14/5 odds. Do you agree or disagree with those predictions? There’s still time to give us your picks before the “Survivor” 35 finale airs Wednesday, December 20.

SEE When is the ‘Survivor’ 35 finale? ‘Heroes v. Healers v. Hustlers’ winner will be announced December 20

In this week’s episode, titled “The Survivor Devil,” Devon and Chrissy made a Final 3 deal with Ryan Ulrich. While Devon and Chrissy seem to have benefited from that partnership, our readers aren’t sold on Ryan being able to win. In fact, he’s down in fourth place with 10/1 odds, below Devon, Chrissy and Ben Driebergen. With his penchant for finding hidden idols when he needs them the most, Ben has third-best odds of 6/1. That makes Mike Zahalsky our fifth-place pick to win Season 35 with underwhelming 100/1 odds.

Based on the past two tribal councils — which have gone unexpectedly, to say the least — it’s still anyone’s game. Host Jeff Probst teased in next week’s trailer that there is one additional advantage still in play. Could it be yet another hidden idol? Or what about Lauren Rimmer‘s unused second vote? Or perhaps it’s simply an advantage that’s to be used in the season’s final immunity challenge? Either way, we can’t wait to see how it all plays out. Who do YOU think will win: Devon, Chrissy, Ben, Ryan or Mike?

Gervase Peterson urges 'Survivor' to be 'more equally diverse,' both on-screen and behind the…

Jeff Probst on what's ahead for 'Survivor' post hiatus: 'The entire culture is in a beautiful upheaval…

During this annoying 'Survivor' hiatus, fans are hoping for 'Bachelor'-style recap…