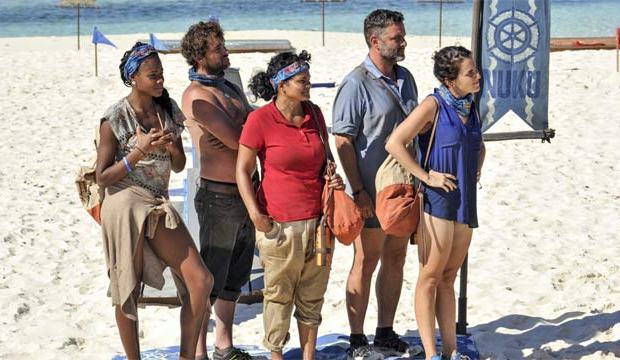 Last week on “Survivor: Game Changers,” J.T. Thomas made the boneheaded decision of telling the opposing tribe that Sierra Thomas was their target, ensuring that they saved her by using a hidden immunity idol. In tonight’s outing, Sandra Diaz-Twine vowed to get revenge on J.T. for his “Dirty Deed” (the name of the episode). Did she succeed? Read our Season 34, Episode 5 recap below and then update your “Survivor” predictions in our weekly event.

At the start of the hour J.T. realized he was on the chopping block on his Nuku tribe, so he set out to find a hidden immunity idol. He soon found a clue that told him to dig in a certain area, just like Tai Trang last week, and he was able to find the idol. Speaking of idols, Tai later found a clue to another one at his Mana camp, but didn’t have enough time to search for it quite yet. And Tavua member Troyzan Robertson still has an idol in his pocket.

At the reward challenge Debbie Wanner told her Mana tribe that she was good at balancing, so they let her do the balance beam. She struggled when balancing — but not as much as tribe mate Hali Ford — and her team ended up losing. Back at camp Debbie blamed Brad Culpepper for always ordering people around and making decisions for the tribe. Debbie screamed and carried on so much that Tai said he was scared to be around her, putting herself in danger the next time Mana loses immunity.

Sensing that J.T. and Michaela Bradshaw weren’t able to work together at Nuku — and hoping to get the target off her own back — Sandra decided to eat all of the sugar for the coffee, knowing that J.T. would blame Michaela and want her out. It worked. The target immediately got off of Sandra’s back and didn’t return for the rest of the episode. Meanwhile at the Tavua camp, Sarah Lacina and Troyzan started talking game play, which bodes well for both of their futures.

During the immunity challenge that once again featured a balance beam and an irate Debbie, both Mana and Tavua came out on top. The losing Nuku tribe was on board to vote out Michaela, but Sandra wanted to get out J.T. instead so she went to Jeff Varner for help. At tribal council J.T. felt safe enough that he did not play his hidden idol, while Michaela was so confident that she started drinking water as the votes were read. In the end J.T. received three votes to Michaela’s two, so he was sent packing, giving Queen Sandra yet another victory.

'Survivor': 30% of fans still idolize the Queen and Boston Rob, even if they made boo-boos this season…

'Survivor: Winners at War': 41% think a bamboozled Sandra Diaz-Twine was right to surrender and quit the…

'Survivor' host Jeff Probst on Sandra's quitting: 'I don't think it changes her legacy. Sandra is a…

'Survivor: Winners at War': Does Denise's epic blindside of Sandra make her the new queen? Not until she…

'Survivor: Winners at War': Ding, dong the ...? Does Denise qualify as the new Queen after vanquishing…

Jeff Probst ('Survivor') wonders if Sandra has any 'fight' left in her: Will she raise the mast at Edge…