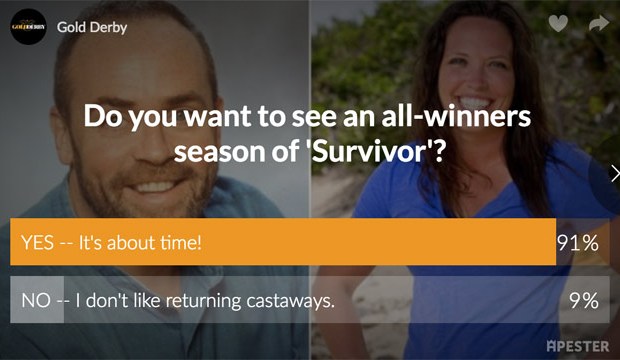 “Survivor: Heroes v. Healers v. Hustlers” premieres Wednesday, September 27 on CBS, but fans are already thinking ahead to the future. Based on the results of our recent poll, 91% of “Survivor” fans are demanding an all-winners season. With 33 champions so far, including two-time queen Sandra Diaz-Twine, there’s no shortage of possible cast members. Do you also want to see an all-winners season, or are you one of the 9% who don’t like returning castaways? Sound off down below.

Four-time Emmy winner Jeff Probst is back to host “Survivor” Season 35 on Wednesday night. Of this season’s new crop of castaways, who do you think is the most likely to join the “Survivor” winners list? Perhaps CBS is waiting for a special landmark — say, Season 40 — before they give fans the first-ever winners vs. winners installment?

The very first winner was Richard Hatch in “Survivor: Borneo” (Season 1). Without his savvy game play and his way of treating the other players like chess pieces, reality TV may have never become as successful as it is today. Hatch returned only once, in “Survivor: All Stars” (Season 8), but fans have been clamoring to see him come back again ever since. Perhaps Hatch is waiting for an all-winners season?

The most recent champion was Sarah Lacina. This police officer only made it halfway through her first season, but she returned in “Survivor: Game Changers” (Season 35) and completed dominated the social and physical aspects of the game. (Watch our live exit interview with Lacina.) How fun would it be to see Lacina go head to head against Hatch? Would they clash or would they bond?