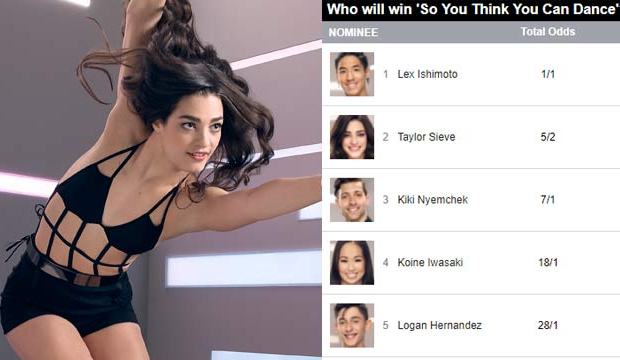 Season 14 of “So You Think You Can Dance” is still Lex Ishimoto‘s to lose. He remains the frontrunner by a sizable margin according to the combined predictions of our users who have entered our weekly contest. But one of his rivals has chipped into his lead, ever so slightly, so maybe it won’t be such a cakewalk for him after all.

As of this writing, Ishimoto leads with odds of 1/1, which translates to an even 50% chance of winning. That’s actually a slight dip from last week when he had 5/6 odds (56% chance of winning). Cutting into his lead this week is Taylor Sieve, who has rocketed up to odds of 5/2 (29% chance of winning the competition). Last week, Sieve was an underdog with 12/1 odds (only an 8% chance of winning). So what changed? Perhaps it’s the fact that of the remaining six competitors, Ishimoto and Sieve are the only ones who have never been in the bottom three based on viewer votes. And it’s possible that Sieve will be the only woman in the final four because Kaylee Millis and Koine Iwasaki might both be sent home in tonight’s double elimination. If that’s the case she may stand out to viewers while her male rivals split the vote.

Ranked third in our winner predictions is Kiki Nyemchek with 7/1 odds (12% chance of winning). He’s not guaranteed a spot in the finale, though. He surprisingly landed in the bottom three in last week’s show. The judges immediately saved him, but the judges won’t have a say tonight: these results will based strictly on viewer votes.

What do you think? Click on the graph below for more detailed odds, and you can make or update your predictions here as often as you like before tonight’s show.