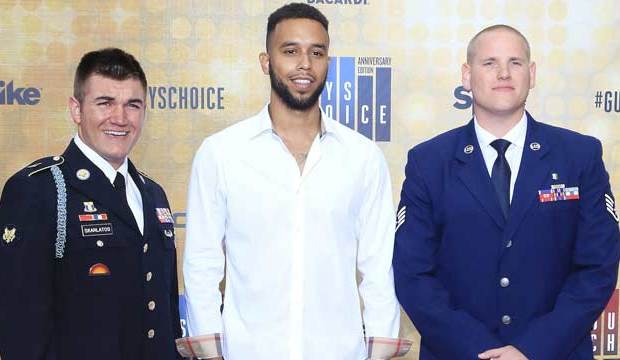 Playing a biographical role in a Clint Eastwood movie has been known to pay off for A-list stars: Morgan Freeman and Matt Damon both earned Oscar nominations for the true-story “Invictus” (2009), and so did Bradley Cooper as the title character in “American Sniper” (2014). And Tom Hanks was a Critics’ Choice nominee for playing the hero pilot in “Sully” (2016). So which movie stars has Eastwood cast in “The 15:17 to Paris” as the real-life men who thwarted a terrorist attack aboard a train through Europe in 2015? No one — they’re going to play themselves.

Our sister site Variety reports that Anthony Sadler, Alek Skarlatos, and Spencer Stone will depict their own harrowing experience on-screen — if you want something done right, do it yourself. But they may not be full-blown leads in the film. The film will focus on their childhoods in addition to their fateful experiences on-board that train, so they won’t be the only actors playing their roles. Other young actors will play them during their earlier years. Also signed on for the film are “The Office” star Jenna Fischer and “Archer” actress Judy Greer.

Eastwood previously took a chance on first-time actors in his 2008 film “Gran Torino”: he directed and co-starred with Bee Vang and Ahney Her, who had never been in a movie before. But it’s quite different to have well known figures play themselves in their own story. At least Skarlatos has experience in front of the camera. After the train incident that made him famous he was cast in season 21 of “Dancing with the Stars,” placing third. That begs the question of whether it’s most nerve-racking to fight terrorists, dance on live TV, or star in a Clint Eastwood movie about yourself — presumably National Guardsman Skarlatos only trained for one of those things.