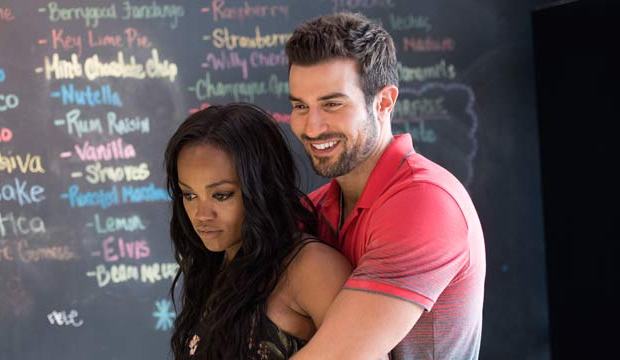 The July 17  episode of “The Bachelorette” saw Rachel Lindsay visiting the hometowns of the remaining four bachelors, adding a few more local spots to all the wrongs places one looks for love. Did you know what was coming?  Make your “The Bachelorette” 19 predictions for a chance to top our famous leaderboards. It’s fun and easy, so start predicting right now.

First up was Eric, who took Rachel to his native Baltimore. In fact, Rachel is the first girl Eric had ever brought home to meet his family, adding a bit of poignancy to this trashy affair. Their date was relatively normal, which is probably why the producers decided to air it first in order to tease the juicier stuff before the commercial breaks.

Next it’s off to Miami to meet Bryan’s family. Bryan’s overbearing mother drove away his last girlfriend, and she seems hell-bent to do the same with Rachel until she finally relents and gives her blessing. Perhaps it’s not always such a good idea to meet the parents.

Then there’s Peter, who hails from Madison. Peter, who previously confessed he had never dated a black woman before, introduces Rachel to his diverse set of friends (eight out of ten of whom, he claims, are black). When she meets his family, she’s taken by how he interacts with his niece, but worried when his mother confides she doesn’t think he’s ready to settle down.

Finally, there’s Dean, who from the beginning has been hesitant about introducing Rachel to his family. Dean’s mother died when he was 15, and his father has since become a Kundalini yogi, changing his name to Paramrup. Dean hasn’t seen his father in two years, a fact that the producers exploit to the fullest extent. The date ends in a shouting match, after which Dean tells Rachel he’s falling in love with her.