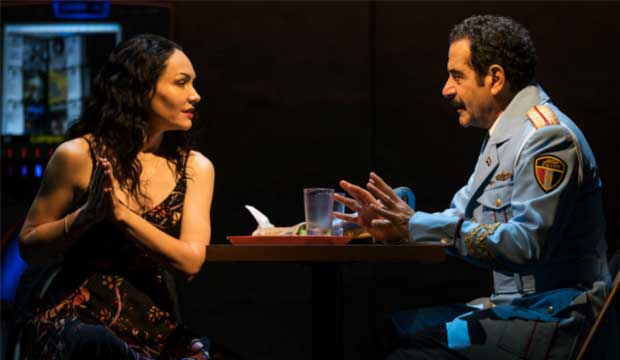 Last year, the small and intimate musical “The Band’s Visit,” based on the 2007 independent film of the same name, opened Off-Broadway at the Atlantic Theater Company. The show, which earned rapturous reviews from critics and landed on numerous best-of lists for the year, transferred from downtown to Broadway, opening at the Ethel Barrymore Theatre on November 9.

“The Band’s Visit,” which features a score by David Yazbek, takes place over the course of an evening in the sleepy Israeli town of Bet Hatikva, where the members of Egypt’s Alexandria Ceremonial Band mistakenly arrive for a performance thinking they have reached their destination of Petah Tikva. When café owner Dina (Katrina Lenk) offers for her and her friends to house the band members overnight, the misunderstanding leads to a number of joyous, intimate, and heart-wrenching connections between strangers.

How did critics respond to the transfer of “The Band’s Visit” to Broadway?

“The Band’s Visit” received rave reviews from critics. In a glowing notice, made complete with the coveted Critic’s Pick emblem, Ben Brantley (New York Times) declares, “It is time to fall in love again” with “one of the most ravishing musicals you will ever be seduced by.” Brantley goes on to praise the “uncanny virtuosity” of Yazbek’s “quietly simmering,” “benchmark score,” the “inspired inventiveness” of director David Cromer’s staging, the “impeccably coordinated creative team,” as well as Katrina Lenk’s “star-making performance,” the “marvelous” Tony Shalhoub, and the “dazzle” of Ari’el Stachel’s “smooth jazz vocals.” Sara Holdren (Vulture) similarly praises the musical as “such a beautiful piece of theater.” Holdren notes that the “funny, generous, sweet” production features “thoughtful costumes,” an “elegantly layered, sandy-hued set,” an “exquisite, exuberant score,” as well as Lenk’s “gorgeous,” Shalhoub’s “heartbreaking,” and Etai Benson’s “excellent” performances.

Equally exuberant, Marilyn Stasio (Variety) calls “The Band’s Visit” an “embraceable” and “disarming” musical that “has the emotional depth that holds up to repeated viewings and the offbeat charm that could make it a cult hit,” similarly praising the cast and the production design. No less enthusiastic, Peter Marks (Washington Post) deems the new musical “gentle, soulful, tuneful” and all-around “beautiful,” singling out Cromer’s “maestro’s virtuosic vision,” Lenk’s “star-making turn,” Shalhoub’s “immaculately tender performance,” and the partnership of Yazbek and librettist Itamar Moses, who together “wring so much personality and melodic soulfulness out of a story about going nowhere.”

At this point in the Broadway season, “The Band’s Visit” is the early frontrunner at the 2018 Tony Awards and might very well rack up double-digit nominations.  The musical will no doubt contend for, and could very well win, Best Musical. At the helm, helmer David Cromer, who won the Drama Desk earlier this year for Outstanding Director for “The Band’s Visit” Off-Broadway, will most certainly earn his career-first Tony nomination.

Composer David Yazbek, who has earned a Tony nomination for Best Score for each of his three previous Broadway productions (“Women on the Verge of a Nervous Breakdown,” 2011; “Dirty Rotten Scoundrels,” 2005; “The Full Monty,” 2001) will not only earn his fourth nomination for “The Band’s Visit,” but will also likely win his first Tony following up his two Drama Desk wins for the score in the Best Music and Best Lyrics categories. Librettist Itamar Moses, whose book for the show marks his first Broadway credit, will likely contend for Best Book as well. Orchestrator Jamshied Sharifi could also earn his first Tony nomination in the Best Orchestrations category, especially considering the omnipresence of the show’s musicians both on- and off-stage.

Onto the cast of “The Band’s Visit,” standout actress Katrina Lenk, who most notably appeared on Broadway in Best Musical winner “Once” and last year’s Best Play nominee “Indecent,” is the early favorite to win Lead Actress in a Musical. Her leading man, Tony Shalhoub, who has three previous Tony nominations (“Act One,” 2014; “Golden Boy,” 2013; “Conversations With my Father,” 1992), will easily score a bid for Lead Actor. Due to an embarrassment of ensemble riches, any one of four or more of the other actors from “The Band’s Visit” could land nominations in the Featured Actor category.  Ari’el Stachel, making his Broadway debut, seems like the most likely nominee for his standout, jazz-inspired song “Haled’s Song About Love.” Etai Benson, Tony-nominee John Cariani (“Fiddler on the Roof,” 2004), Andrew Polk, and Adam Kantor will all be competitive for nominations, too, as each gets at least one memorable song over the course of the one-act musical.

As for the design team, expect a wealth of Tony kudos as well. Scenic designer Scott Pask has three Tony Awards on his mantle (“The Book of Mormon,” 2011; “The Coast of Utopia,” 2007; “The Pillowman,” 2005) out of six total nominations and his applauded turntable set should land him another nom. Costume designer Sarah Lax earned positive notices from critics and may earn her first-even Tony nomination.  So too might lighting designer Tyler Micoleau, who also received many kind notices for his evocative work for “The Band’s Visit,” his first Broadway credit. Fortunately for the musical, 2018 will mark the reinstitution of the Sound Design categories at the Tonys, which was last awarded in 2014, and Kai Harada, who earned a bid in 2012 for the revival of “Follies” in this category, could easily earn a second.

One category that “The Band’s Visit” may have to sit out, despite the likely adoration of the Tony nominating committee, will be Best Choreography. Despite the talents of Patrick McCollum, the musical simply shies away from the showy type of footwork that the Tony Awards tend to lean toward in the category. With only a few dozen nominators to sway, however, it’s not unreasonable to think that the likely overwhelming love for the musical could push it toward a perhaps unexpected bid in this category, too.