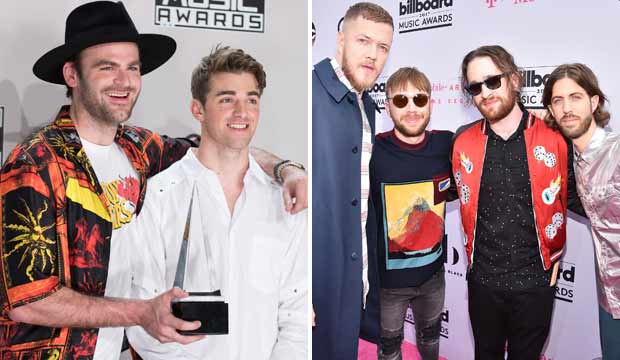 The Chainsmokers and Imagine Dragons are both past winners at the American Music Awards, but neither has won Favorite Pop/Rock Duo or Group. Our readers think these are the two bands to beat in the race this year, but which popular act has the advantage? It’s shaping up to be a close race.

As of this writing The Chainsmokers have the lead with odds of 11/10 based on the combined predictions of hundreds of users at Gold Derby. That includes strong support from some of the savviest derbyites at the site. They’re currently picked to win by 15 of our Top 24 Users, who had the highest scores when predicting the 2016 AMAs. They also have the edge according to 17 of our All-Star Top 24, who got the highest scores when you combine the last two years’ AMA predictions. Given those elite users’ strong records forecasting these awards, you should definitely keep their predictions in mind when making or updating your own predictions before Sunday night’s show.

The Chainsmokers are among the most nominated artists of the year with five bids, including Artist of the Year. And they’re the defending champions for Favorite Electronic Dance Music Artist, which they’re tipped to win again. The EDM duo was nominated in this category once before (2016), losing to Twenty One Pilots, but luckily for The Chainsmokers, Twenty One Pilots aren’t in contention this time around.

However, Imagine Dragons aren’t too far behind. They get 2/1 odds and have support from nine of our Top 24 and seven of our All-Stars, which is a sizable number of top users who think the overall consensus is wrong. This is their third nomination in this category; they lost both of their previous bids to One Direction (2013-2014), but that may not tell us much since that British boy band were pretty much unbeatable, winning every award they were nominated for from 2013 to 2015.

This year Imagine Dragons have only one other nomination, Favorite Alternative Artist, which they won twice before (2013-2014). So if their fans want to rally around them they have limited available options. That could help them consolidate support here, which could make the difference in a close race.