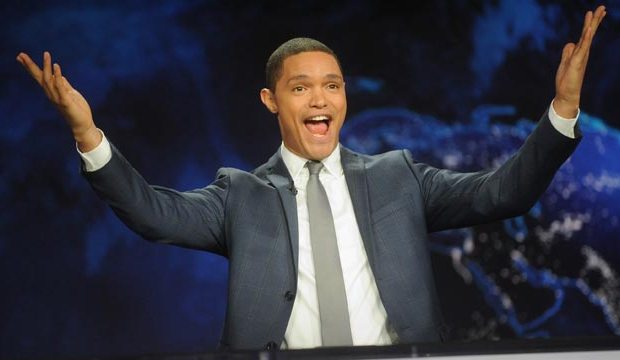 For the past few years now the question has been asked, “Who is the successor to the throne of Jon Stewart?” By which, people can’t help but wonder who will take the responsibility of becoming the sane, rational voice of reason on late-night television, the honest, clever, and of course funny individual who rises above the rest to tell it like it is, no matter how complex or hard the truth may be, just as Stewart always did on “The Daily Show” throughout his phenomenal run. Some people have said Seth Meyers, others even insist on arguing that “Daily Show” veteran writer and correspondent Samantha Bee is the spiritual heir to the throne. However, I am convinced that the answer is far more simple and obvious than that. The true “successor” to Jon Stewart is none other than the man he himself picked to take his place as the host of his own “Daily Show,” Trevor Noah.

Indeed, the brilliant Noah has consistently discussed and made fun of the news from a liberal perspective, but also with fair acknowledgment to the other side. In a recent segment cleverly called “So much news, so little time,” he explains why Ann Coulter should have the right to speak in spite of her “hate speech,” as he breaks down how free speech doesn’t simply apply to one side of the political spectrum. As Noah puts it, “A side effect of free speech is there will always be hate speech. If you ban one, you risk banning the other,” and uses an example of U.S. Attorney General Jeff Sessions hypothetically labelling the activist group Black Lives Matter as “hate speech.”

At first, he even appears to invite the controversial Coulter on at for an interview, but referencing the title of the segment, he says, “We just don’t have the time,” and then discussing President Donald Trump inviting the entire U.S. Senate on buses to a classified briefing regarding the nuclear threat of North Korea, only for little to be actually learned from the event. Noah makes fun of the ridiculous event, and quips, “I wouldn’t be surprised if he just brought them there to be like, ‘Did you guys know, there are two Koreas? It’s a lot more complicated than we thought, folks.’”

Other times, “The Daily Show with Trevor Noah” really shines when he tackles an issue that affects him more than any other late-night host: racism. The biracial comedian was literally “born a crime” to a black mother and white father in South Africa during the racist Apartheid era. So, when it comes to the hot-button topic of racism, he has far more of a personal perspective on it than Samantha Bee could ever have. In another recent episode that made waves across mainstream media, Noah dissected the offensive and controversial holiday in Alabama and Mississippi known as “Confederate Memorial Day.” Pointing out how the Confederates fought during the Civil War for their right to own black people as slaves, he asks, seeming appropriately pissed and genuinely confused, “What are black people supposed to do on this holiday?”

Nonetheless, just as his predecessor Stewart was known for doing, he is able to find humor amidst the insanity, joking as if he were a black person from either of those states reacting the news of this holiday, “So uh, I either get the day off or I support slavery? Man, I’ll take the day off, but I’m watching BET (Black Entertainment Television) the whole time!” Later in the segment, he shows a clip from New Orleans, Louisiana, of city officials in full body armor removing a Confederate Monument. Trevor points out how they are wearing the armor “because they are worried that some radicals, with extreme beliefs, might kill them,” referring to bigoted white supremacists. He then points out the blatant hypocrisy that if these “radicals” were brown, we would rightfully call them terrorists, but since they are white, he jokes that we don’t have a word for them, guessing they are “misguided patriots.”

Trevor Noah on Bill O’Reilly firing: ‘He was so racist it somehow became funny’ [WATCH]

For many years “The Daily Show” dominated the Emmys when Jon Stewart was the host, winning a stunning 10 years in a row for Best Variety Series (2003- 2012), and even winning an 11th time in 2015 when the category was separated into Best Variety Talk Series. All in all, Jon Stewart’s “Daily Show” was nominated for 60 Emmys and won 23 of them. Unfortunately, Trevor Noah’s “Daily Show” has so far failed to receive the kind of accolades his predecessor received in his prime, getting completely shut out at last year’s Emmys.

However, the same could be said of Jon Stewart himself, who did not skyrocket in acclaim when he first started hosting the show in 1999. It wasn’t until a couple of years later in 2001 when “The Daily Show with Jon Stewart” finally picked up a pair of Emmy nominations, for Best Variety Series and for Best Variety Writing, winning the latter. It would be an ironic twist if Noah’s own “Daily Show” suffered the same fate as its iconic and landmark predecessor, with a lukewarm beginning, only to gradually evolve into something far smarter, relevant, and of course, funnier.

'The Daily Show' director David Paul Meyer on how a smartphone saved the Dr. Fauci interview: 'You need…

From a distance: 'The Daily Show' host Trevor Noah has been right at home doing shows from home…

'Dancing with the Stars' alum Trevor Noah calls out Sean Spicer for politicizing the show: 'He does not…

Emmys at last for 'The Daily Show' correspondents? Be my guest!